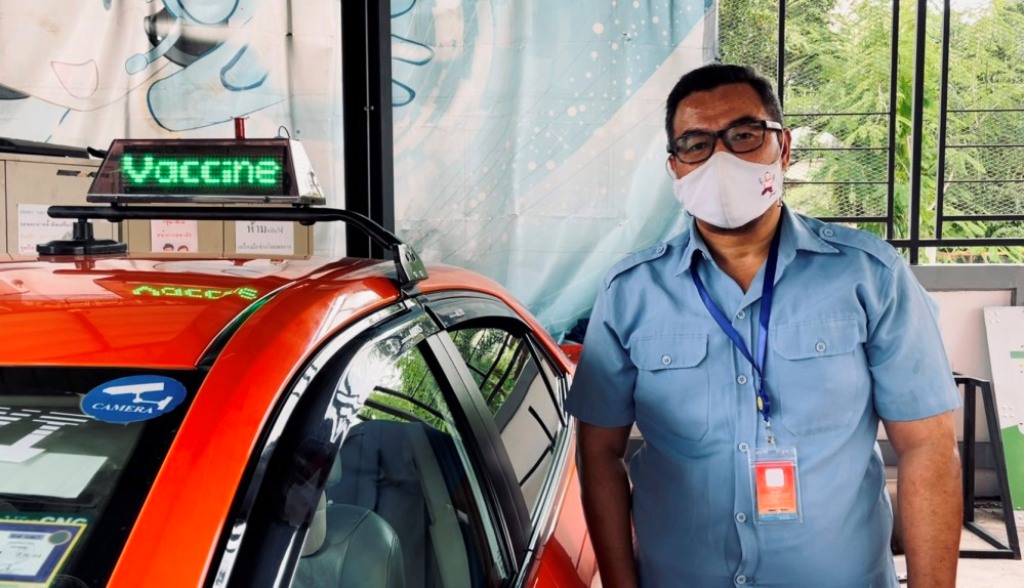 With a green illuminated sign that reads “Vaccine” installed on top of their taxi cabs, the taxi drivers who have been fully vaccinated are earning more during the COVID-19 pandemic in Thailand.

Managing Director of Smart Taxi, Piset Thinnakorn na Ayutthaya, who came up with the idea of the sign, explained to Thai PBS that it is aimed at building confidence among commuters and encouraging taxi drivers to get inoculated.

As most taxi drivers have only received one dose of the vaccine so far, only two taxis in Bangkok are currently displaying the sign. Since Monday (May 24th), the two drivers have attracted more passengers, which has increased their income, to an average of 600 baht per day.

Once drivers receive both doses, they have to present their official vaccination documentation to the company, in order to be listed on the Department of Land Transport’s database.

One taxi driver, who has received both doses, said that commuters feel more confident using taxis. He also said that having the signs on taxis is a good idea, as it will help attract more customers.

Meanwhile, a 53 year old man has been arrested for allegedly shooting and killing his 19 year old girlfriend in Bangkok while they were riding in a taxi cab.

Reports say the couple were in a taxi cab passing by the Big C Rama II complex on Rama II Road when the shooting took place. The woman apparently told her boyfriend that she was breaking up with him. The Taxi driver said a “fight broke out” and the man allegedly pulled out a gun and shot his girlfriend.

The man opened the taxi cab door and tried to flee, but he was later caught by locals and detained by police. The woman was sent to a hospital, but later died.