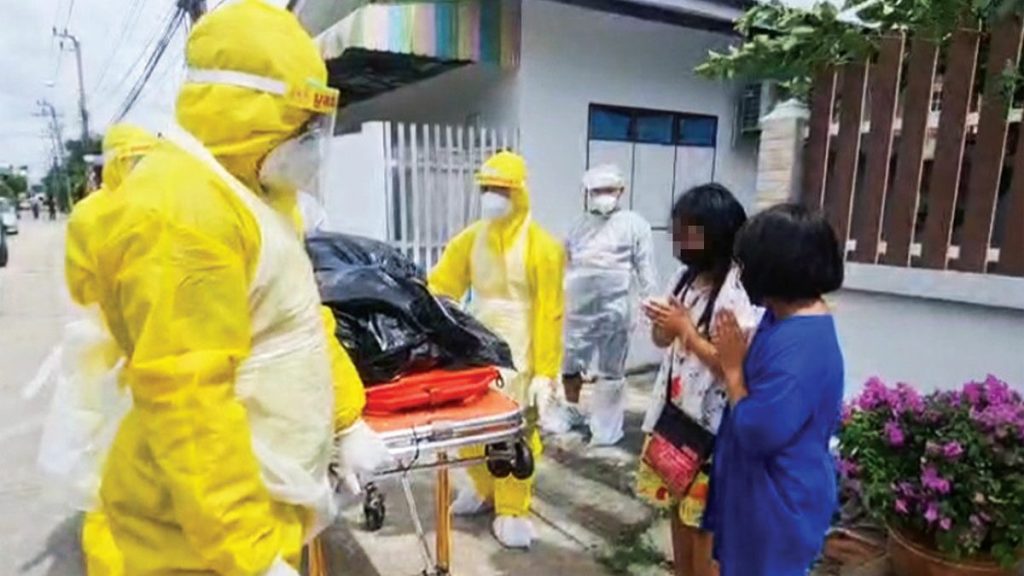 Two young girls aged 7 and 9 years woke up on Monday morning to find their mother dead on the floor beside them from a Covid-19 infection. Their mother had been seriously ill for some days the girls told police.

On Monday Samut Prakan police were called to the room in tambon Bang Chalong after the woman’s body was discovered about 10.30am. They were accompanied by a doctor and rescuers.

Ms Apaporn Suntarachon, 44, was found dead lying on the bedroom room floor. There was no sign of physical harm to the woman. She was believed to have died about five hours previously.

The body was taken Rama Samut Prakan Hospital for an autopsy to establish the cause of death.

The two girls in the company of neighbours said they lived there with their mother who was a masseuse. They said that a few days ago their mother had started coughing up blood, had chest and back pains, vomited and had problems breathing.

On Sunday, neighbours helped her go to a doctor, who gave her some medicine. She returned to her room and went to sleep. The girls said they slept with their mother throughout the night.

Late on Monday morning they woke up and found their mother lying face down on the floor by the mattress. She was not moving. They called for help. Neighbours came to have a look, and told them their mother had died.

Anyawut Pothi-ampo, of the Ruam Katanyu Foundation, said the two girls were tested with Covid rapid antigen kits, and the results were positive.

The cause of Ms Apaporn’s death was not known, pending the autopsy result, but police believed she died of Covid-19.

According to the Bangkok Post, the Provincial welfare office will take the two girls for further testing to confirm the antigen results. They said Ms Apaporn’s death had left them without a guardian to care for them. The welfare office is now searching for relatives to care for the two orphaned girls.