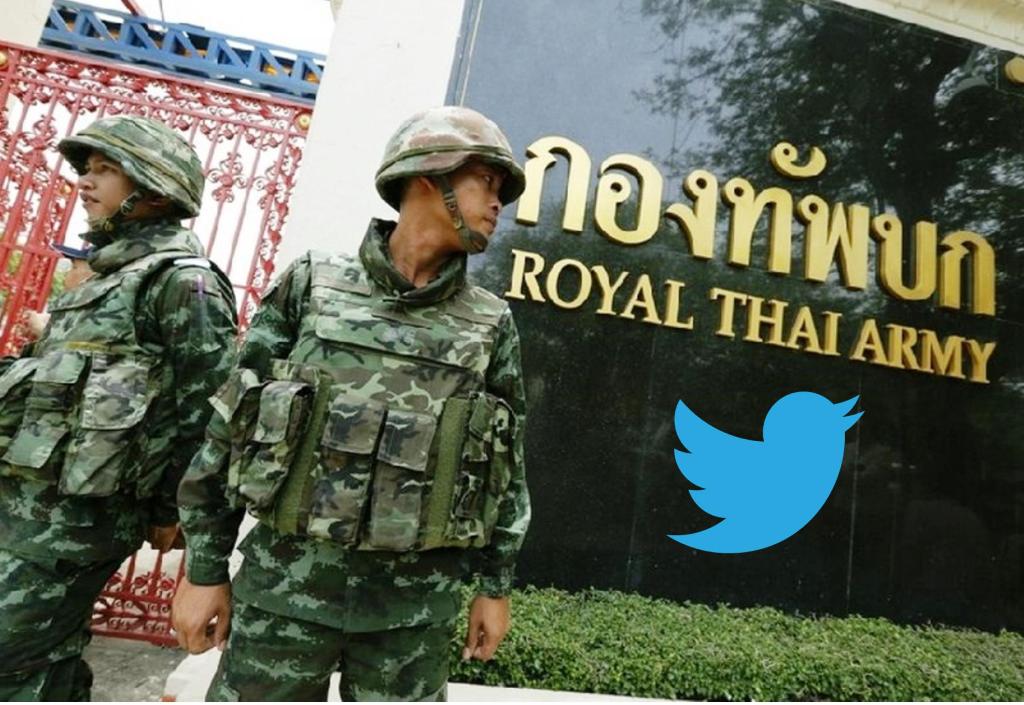 Twitter have taken down more than 900 Twitter accounts linked to the Royal Thai Army, that they said were used by political and state-backed groups to deceive users.

“Our investigation consequently uncovered a network of accounts partaking in information operations that we can reliably link to the Royal Thai Army (RTA),” Twitter said in a blog post. “These accounts were engaging in amplifying pro-RTA and pro-government content. They were also engaging in behavior targeting prominent political opposition figures.”

Twitter also said the network involved 926 accounts. “[We will] continue to enforce against small-scale activity associated with this network, as we identify it.”

The origins and extent of the army’s efforts to paint critics in a negative light and influence public opinion online are detailed in a paper titled “Cheerleading Without Fans.” Its was released on Thursday by the Stanford Internet Observatory.

“To the best of our knowledge, this is the first time a social media company has suspended a network of accounts linked to the Thai Army,” the paper said.

The Stanford report also noted that the army’s accounts had very few followers. Furthermore many never tweeted at all. The average number of followers per account was 2.47 for those that tweeted. And 1.28 for the network as a whole. The most popular account had only 66 followers, it said.

The army on Friday accused Twitter of unfairly linking it with information operations and asked the social media company to clarify the issue.

The army does not have information operations, said Lt Gen Santipong Thammapiya, deputy chief-of-staff and spokesman. It uses social media constructively to only publicize its activities. Especially for assistance for people such as storm victims, he said.

Information from army units is under the control of a public relations working group of the Thai army, he added.

“I insist that we do not have a policy to make Twitter avatars for information operations. Our operations to publicize information are transparent.

Col Sirichan Ngathong, a deputy army spokesperson, said the unidentified Twitter accounts were unfairly linked to the Thai army without any in-depth analysis.

“Unidentified user accounts had nothing to do with any official account of the army. [The Twitter report] focused on quantities, frequencies and hashtags that anyone could do at will,” she said.

The Thai army constructively used Twitter accounts for communications with people and its personnel and shared true information via them, she added. Above all referring to @armypr_news and other official accounts of army units.

In separate statements on Thursday, Twitter and Facebook said they had identified and suspended more than 3,500 accounts between them, which used fake identities and other deceptive behaviors to spread false or misleading information.

The networks targeted users in a wide selection of countries, including the United States where officials have warned that foreign governments are attempting to influence the outcome of November’s presidential election.

After coming under heavy fire for failing to stop alleged Russian efforts to sway the 2016 US election, Facebook and Twitter have announced a string of high-profile take-downs in the weeks leading up to this year’s presidential vote.

In multiple cases, the social media companies have worked with US law enforcement to track and dismantle political influence campaigns targeting US voters which have been attributed to foreign states, most notably Iran and Russia.

Tehran and Moscow have repeatedly denied the allegations.

The take-downs announced on Thursday covered networks with a global reach far beyond the US election. The operations targeted Internet users in at least 16 other countries. Ranging from Azerbaijan to Nigeria and Japan, Facebook and Twitter said.

Twitter said the five networks it had suspended were separately linked. They were linked to groups with ties to the governments of Iran; Saudi Arabia; Cuba; Thailand and Russia.

“Our goal with these disclosures is to continue to build public understanding around the ways in which state actors try to abuse and undermine open democratic conversation,” the company said in a statement.

Facebook also said it had found 10 networks, some of which it had previously identified publicly. The networks were predominantly tied to political groups who target domestic audiences. Including the Myanmar military and the youth wing of Azerbaijan’s ruling party.

“Deceptive campaigns like these consequently raise particularly complex issues Facebook reports. Above all by blurring the line of a healthy public debate and manipulation,” said Nathaniel Gleicher, Facebook’s head of cybersecurity policy.

The Washington Post a leftist publication reported that Turning Point USA was responsible for a “spam-like” political messaging campaign. Saying it pumped out 4,500 tweets containing identical content. At the time, Twitter suspended 20 accounts. Facebook said it would investigate the activity.

Turning Point said the allegations related to a separate entity. “The mistake has been flagged with Facebook’s communication team,” it said in a statement.

Consequently messages left with Rally Forge and its Phoenix area-based president, Jake Hoffman, were not immediately returned. Reuters also reported it was unable to reach representatives for Inclusive Conservation Group.