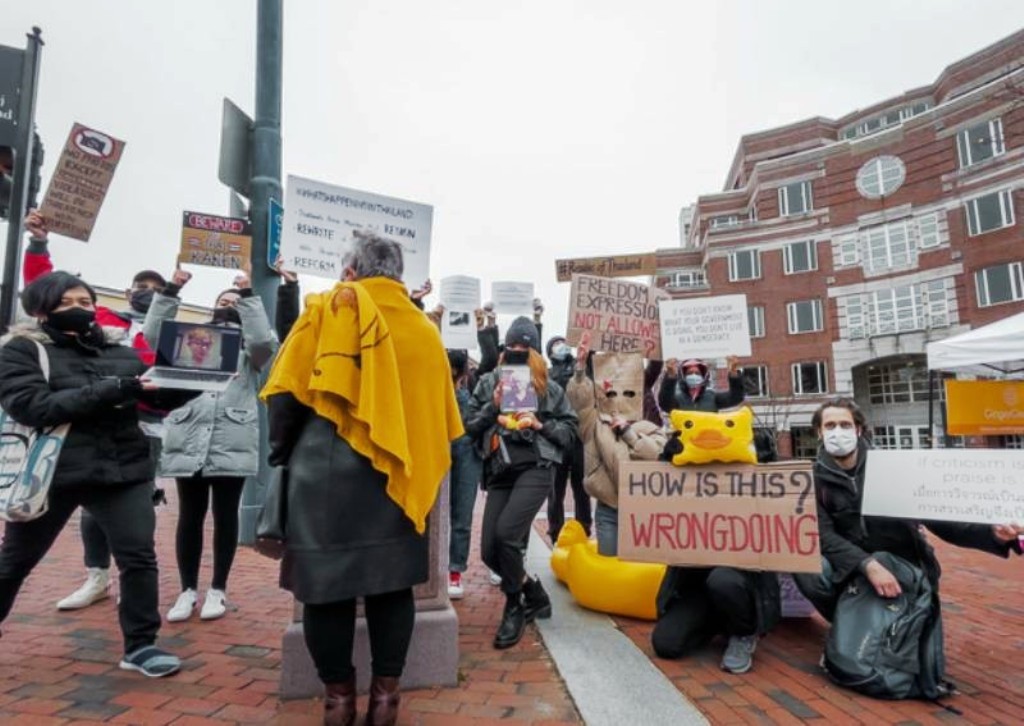 Thai overseas have joined the battle for democracy in Thailand. The Association for Thai Democracy, USA, a US-based non-governmental organization, held a rally in Boston’s Bhumibol Square on Monday. This association was created to seek international support for Thailand’s transition into democracy.

Thai expats in other countries, like Japan, France and the UK, have also been holding similar protests against the Thai government.

In Japan protest leader Parit “Penguin” Chiwarak told protesters that a “big surprise” lay in store for them at the Wednesday rally outside the Crown Property Bureau. The anti-establishment protesters had last gathered in Nakhon Pathom’s Aksa Road on Sunday.

Parit said the protests signify people’s hopes and dreams for a better future as well as their right to decide on their destiny. He insisted that Prime Minister Prayut Chan-o-cha’s resignation is necessary if the government wants to come to an understanding with the protesters.

Meanwhile, Anti-government protesters held a light-hearted rally on the western outskirts of Bangkok Sunday afternoon, where they were joined by red-shirted veterans of a 2014 protest at the same site.

Thousands of people showed up at the latest edition of near-daily anti-government rallies. Police were deployed to keep demonstrators outside the 150-metre radius of the Thawi Watthana Palace.

Protesters on stage once again repeated demands for the resignation of Prime Minister Prayut Chan-o-cha, constitutional changes and reform of the royal institution.

The rally took place at the site of a red shirt demonstration in 2014, and most of the demonstrators appeared to be former members of the United Front for Democracy against Dictatorship. They displayed coffins to commemorate comrades killed in previous protests.

Despite the symbolic gravity, the rally had the air of a temple fair and featured comedians along with speakers taking turns to criticize the government and the military.

Nonetheless, organizers said they had formed various groups of “guards” including vocational students to protect protesters from any attacks. They confirmed that a rally would take place in front of the Crown Property Bureau on Wednesday.