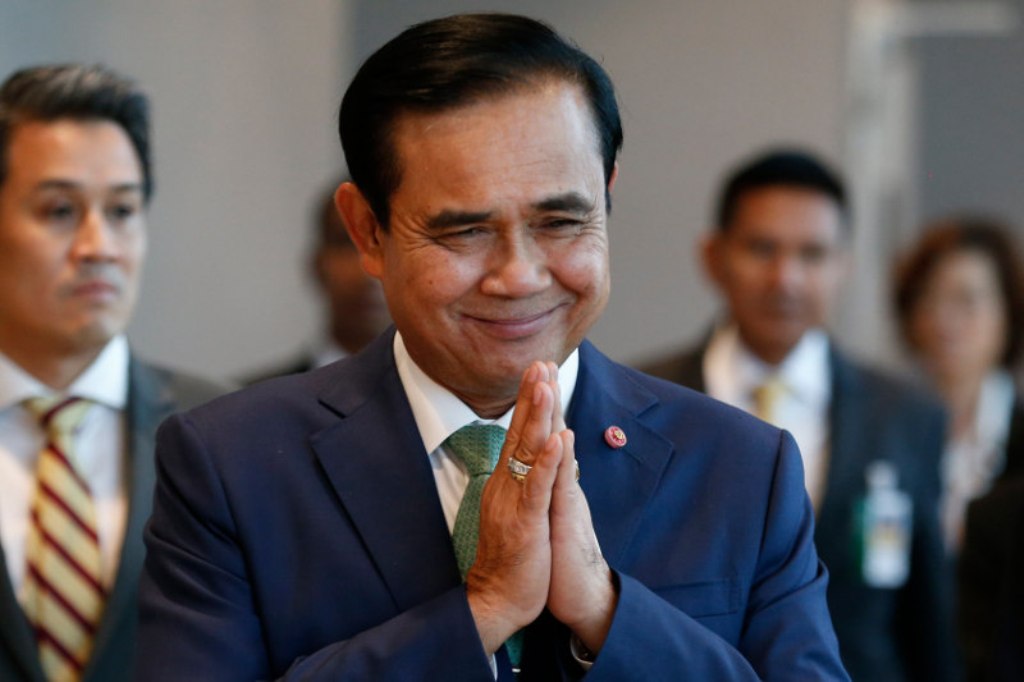 Thailand’s Prime Minister has warned that the anti-government rally planned for Saturday poses a risk of a new surge in Covid-19 transmission.Saying this will  lead to a fresh round of business lockdowns and a further delay in the country’s economic recovery.

The premier raised his fears about a second wave of the pandemic that is now sweeping Europe and other parts of the world. However Thailand has had only 2 local cases of covid-19 in over 100 days. Meaning the country is pretty much covid-19 virus free.

“Let me take this opportunity to speak directly to those who wish to gather for various reasons,” he said. “When you gather in mobs, you are creating an enormous risk of new covid-19 infections. “With that, you also create a great risk to the livelihoods of tens of millions of fellow Thais.”

The premier was speaking ahead of tomorrow’s planned anti-government rally at Thammasat University’s Tha Prachan campus in Bangkok.  It is being led by the United Front of Thammasat and Demonstration (UFTD). Anti-government protesters are demanding Prime Minister Prayut Chan-o-cha’s resignation.

“Any major flare-up of infections will lead to terrible consequences and even worse economic destruction, the likes of which we have never seen. Please think about this,” Gen Prayut said.

He said that he was aware that the protesters had political grievances and issues with the constitution. “I respect your opinions but right now, our country has very much more urgent and painful issues that need to be addressed,” he went on.

“That is the economic destruction brought about by Covid. Let’s not make the situation worse than it is.”

He said the protest would delay an economic recovery because it would affect business confidence and the confidence of tourists wanting to return to Thailand when it is ready to receive them.

“Please think of the tens of millions of other people with whom you share this country — mass gatherings come at a very heavy price for everyone: the risk of new infections, the risk of mass outbreaks and the risk of a return to lockdowns,” said Gen Prayut.

“Let’s try and get through this global crisis and defeat Covid-19 together first. Then we can come back to politics.”

The prime minister pointed out that Spain’s daily infection rate was now 12,000 — higher than even the peak of the crisis in March and April, and the European country had now suffered 30,000 deaths.

France, he said, was also reporting even higher daily infection rates than during the peak of the crisis. At almost 10,000 new infections a day, and also had a total death toll of over 30,000.

Speaking at Government House earlier on Thursday, Gen Prayut also warned the protesters not to intrude on government office buildings, which were protected by law and must not be violated.

Officials will do their duty at rally

Nonetheless, the PM promised that protesters would be treated “gently” during this weekend’s rally. He alleged some people and groups were trying to instigate violence but his government was trying to avoid that.

“Officials will do their duty. I told them to handle [he protesters gently,” Gen Prayut said.

In an interview with the Bangkok Post, Satish Sehgal, president of the Indian-Thai Business Association, warned the demonstrators not to mention the monarchy. He also said the planned rally was ill-timed. Because the country was struggling with the economic problems caused by the pandemic.

“My stance is that this is not an appropriate time for protests. Furthermore protesters should stay away from the institution,” Mr Satish said.

Deputy Prime Minister Prawit Wongsuwon said the protesters must stay at least 50 meters away from Government House. Also that security officers had been instructed to do their best to avoid clashes.

Opposition parties issued a joint statement voicing support for the anti-government protest. Pheu Thai Party and opposition leader Sompong Amornvivat said the demonstrators had the right to express their views, so the government should protect that right and allow them to use a public area for their rally.

Members of opposition parties would observe the rally, he said.

The demonstrators are calling for the prime minister’s resignation, the dissolution of parliament, a new constitution, an end to harassment of government critics and for the monarchy to be reformed.

Munin Pongsaparn, dean of Thammasat University’s faculty of law, on Thursdayannounced that at the request of security agencies all activities and classes would be suspended tomorrow and Sunday.

The faculty will also close the gates by Sanam Luang and Tha Prachan on those days, he said.