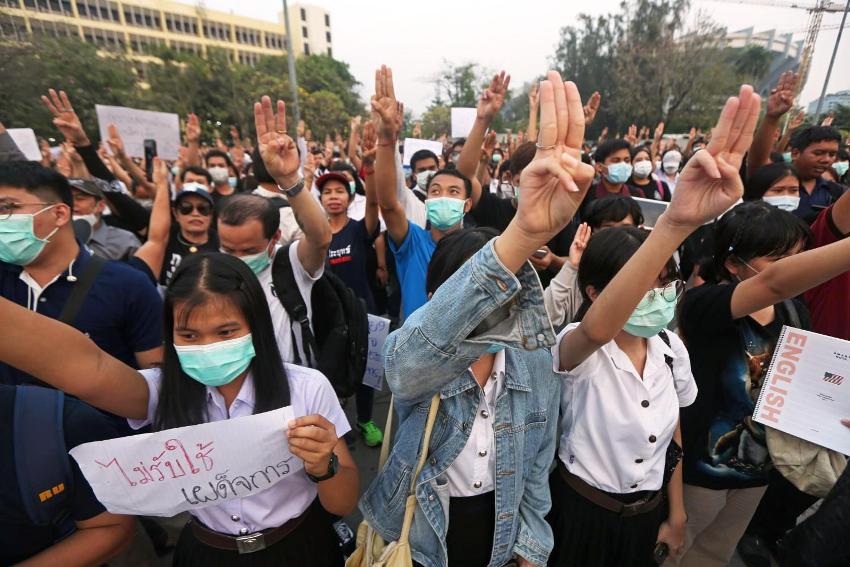 Thailand’s National Security Council (NSC) is warning student protesters not to take their anti-government campaigns to the streets. Saying they risk being manipulated by “third hands” who wish to see demonstrations lead to unrest.

NSC secretary-general Somsak Rungsita told the Bangkok Post yesterday security agencies are keeping a close watch on flash mobs. These mobs are being held by students in the wake of the dissolution of the Future Forward Party.

Gen Somsak said students should limit their activities to their university campuses rather than taking to the streets, as the NSC is concerned that they may be stirred up to provoke violent incidents.


The NSC is now assessing the security situation daily with soldiers and policemen deployed to maintain order, he said, adding that security authorities have been instructed to take a lenient approach with the protesters.

“It will be difficult to maintain security if they take to the streets as these ‘third hands’ may seek to instigate disturbances,” said Gen Somsak, adding the government and security agencies have no authority to restrict the right to freedom of expression.

The dissolution of the FFP on Feb 21 consequently sparked anti-government rallies. Secondary and university students across the country protested against what they perceive as unfair treatment of the party.

The FFP was dissolved by the Constitutional Court over a 191.2-million-baht loan. The loan was taken from former party leader Thanathorn Juangroongruangkit. Its 16 executives were also slapped with a 10-year ban from politics.

After the verdict, the FFP, rechristened itself as the Future Forward Movement. They have vowed to continue to promote its ideology outside of parliament. Furthermore potentially rattling government nerves.

Meanwhile, Isara Seriwatthanawuth, a list MP for the Democrat Party, said yesterday he has proposed an urgent motion to set up a special House committee to allow students to work with lawmakers to address social injustice, following the anti-government flash mobs.


Students voices must be heard

He proposed the committee comprise a student representative from each school and university, so that their grievances can be addressed within the parliamentary system.

Mr Isara said students are a force to be reckoned with. They will also play a vital role in steering the country towards a brighter future.

“Student voices must be heard if efforts to solve the country’s problems are to be successful,” he added.

In a Facebook post, Mongkolkit Suksintharanon, a list MP of the Thai Civilized Party, echoed the view. Saying that the House should convene a special session to discuss ways to prevent political tensions. Above all stemming from rallies getting out of hand.