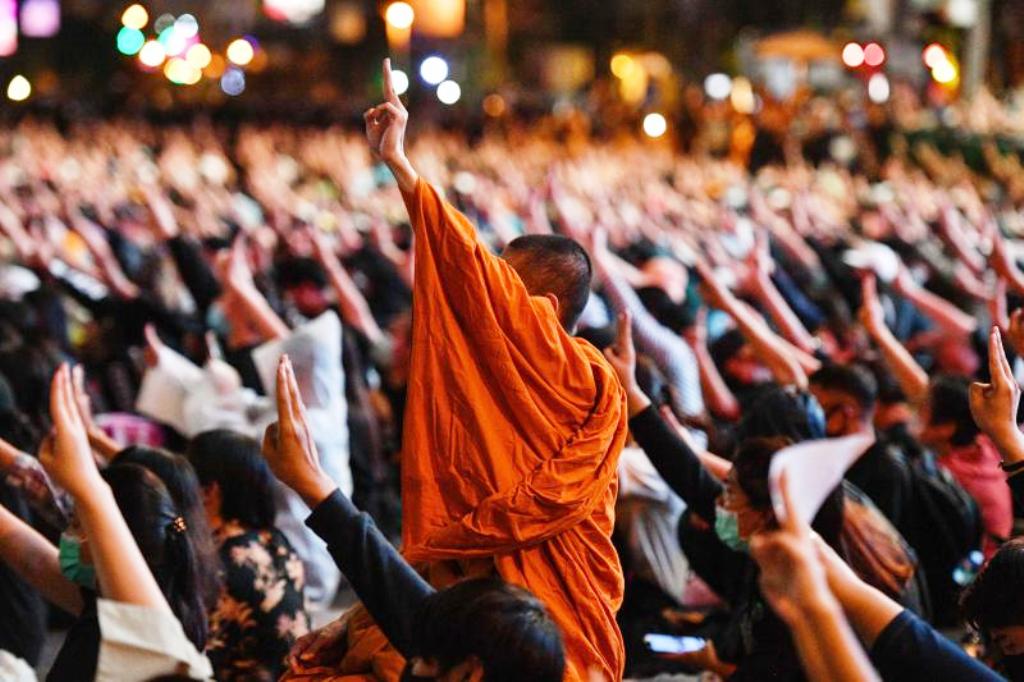 Thailand’s National Office of Buddhism has issued an order barring monks and novices from joining anti-government protests, its director Narong Songarom said. Monks who disregard the ban could be defrocked.

The NOB and the Sangha Supreme Council of Thailand have previously notified the heads of the monks’ governing branches across the country to make sure that monks and novices do not engage in politics or political activities, Mr Narong said.

His comments were in response to media reports and photos taken of individuals in saffron robes who participated in anti-government protests. They joined the protests despite repeated warnings from the NOB. A group of them were pictured holding placards demanding the right to vote, as monks are barred from voting.

Others were reportedly questioning why they must obey the rule which requires them to shave their eyebrows. They were part of a protest on Nov 8 in Bangkok, the Bangkok Post reports.

“The rules clearly say that monks must have their eyebrows shaved regularly. If they cannot accept the rule, they should also leave the monkhood. Furthermore no one forces anyone to be ordained.” said Mr Narong.

Somdet Phra Bhuddajarn, abbot of Wat Trai Mit Witthayaram who supervises the enforcement of monastic discipline, has also been assigned by the NOB to come up with guidelines to prevent monks from rallying.

Monks and novice protesters will face punishment that could lead to expulsion from the monkhood, according to the NOB’s latest resolution. Government agencies have been asked to check on protesters in saffron to see if they are genuine or fake monks, the director added. So far, one monk has been confirmed to have joined the anti-government protests.

The anti-government protesters want Thai Prime Minister Prayuth Chan-ocha to step down. They also wany the constitution to be amended to make it more democratic. Furthermore they want reforms to the monarchy to have it conform to democratic norms.

Thailand’s LGBT community and anti-government protesters joined in a Pride Parade on Nov 8th calling for equal rights as well for the ousting of Prime Minister Prayuth Chan-ocha and reforms to the monarchy.

The “Seritoey Plus” (Free Gender) group of black-clad people gathered at Samyan Mitrtown in Pathumwan district at around 3.30pm.

While the choice of the group’s name was not explained, it brings to mind Seri Thai, the Thai underground resistance movement against Imperial Japan during World War II, and katoey, a Thai term used to describe transgenders.

The demonstrators planned several shows and dances on Silom Road, the destination of their march.

A protest movement that emerged in July has drawn a wide range of interest groups to push for greater democracy and human rights in the Southeast Asian country. Members of the LGBT community wearing colourful outfits marched in the capital Bangkok with youth and student protesters.