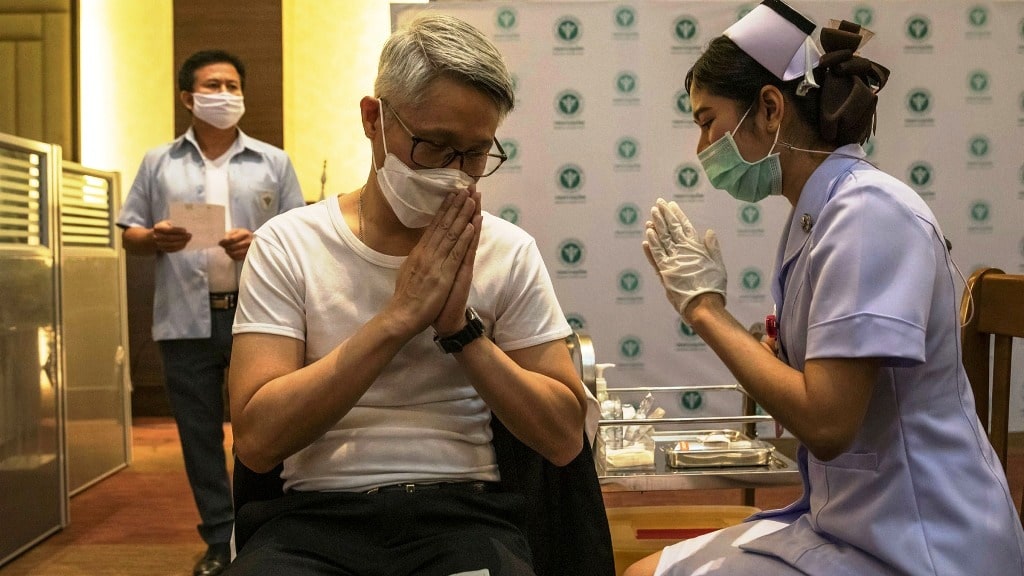 Thailand’s Foreign Ministry has announced that all foreigners in Thailand will be able to register at vaccination centres for Covid-19 shots from June 7. Foreigners can register to get their vaccine shots at designated hospitals and health centres where they live.

Deputy spokesman Natapanu Nopakun said the government had set June 7 for the start of the vaccination campaign.

“Thailand will not be safe until everyone is vaccinated,” he said during the daily briefing of the Centre for Covid-19 Situation Administration, and late relayed the message on his personal Twitter account.

The announcement follows confusion and bewilderment in foreign communities after the Public Health Ministry said on May 4 that priority would be given to vaccinating Thai people first.

It reversed the decision on May 6, announcing equal access to covid-19 vaccines for Thai and foreign nationals to help create head immunity.

The announcement however does not mention which covid-19 vaccines will be available to foreigners once the vaccination campaign starts. Thailand’s FDA has licensed three COVID19 vaccines, AztraZeneca/Oxford, the Sinovac from China and from Johnsons and Johnsons.

However, only two vaccines (AztraZenaca and Sinovac) are available right now. Thailand is expecting to get the Moderna Covid-19 vaccine by this October as an alternative to AstraZeneca and Sinovac.

According to the Thaiger the secretary-general of the Private Hospital Association, says 5 to 6 million doses will be shipped to Thailand in the second half of this year.

Both the AstraZeneca and Sinovac vaccines are still undergoing clinical trials across the globe, so there is some uncertainty as to how effective each vaccine is against COVID-19 Healthline reports.

There was some controversy over the effectiveness of AstraZeneca’s vaccine in late 2020 when it was revealed that some people in the early study groups only received half doses of the vaccine.

Data on Sinovac’s CoronaVac vaccine is limited since a number of international studies on the vaccine are still underway. In one report, investigators report that 97 to 100 percent of people who received the vaccine in clinical trials developed antibodies to COVID-19, but not all of the immune response markers measured in other studies were investigated for the CoronaVac vaccine.

Another report on the effectiveness of CoronaVac reveals that phase 3 clinical trial results have yet to be released by Sinovac, but a trial in Chile shows an effectiveness rate of just 56.5 percentTrusted Source after full vaccination with CoronaVac.

AstraZeneca vs. Sinovac side effects

Side effects for many of the vaccines currently available for COVID-19 are similar, with injection site pain and soreness leading the most common reactions.

For the CoronaVac vaccine, injection site pain and soreness was the most common side effect, reported by 17 to 21 percent of people who received various doses of the vaccines.

In most cases, the reactions were mild and resolved within 2 days. There was one case in the phase 1 trial for the vaccine where a recipient developed an allergic skin reaction with welts but was treated with antihistamines and steroids and resolved in 3 days.

These symptoms were reported far less than injection site pain, according to trial data.

Rashes on People of Color

Redness, irritation, and hives are easily given away by redness and raised areas on white skin, but detecting hives or rashes on other skin tones may be more difficult.

If you have black or brown skin, it can be a challenge to see redness, but you can still detect hives and skin irritation through:

If you experience swelling in your mouth or throat or have trouble breathing, this is a sign of an anaphylactic allergic reaction. You should call 911 or go to the nearest emergency room immediately.

The AstraZeneca vaccine attracted a lot more attention for its side effects after some people developed blood clots after vaccination.

Administration of the vaccine was paused in many parts of the world as regulators investigated the clots, concluding they were a very rare side effect — impacting about 86 people out of the 25 million who had received the vaccine. European regulators allowed AstraZeneca to resume its vaccination program, but some countries restricted its use to older adults.

Other side effects of the AstraZeneca vaccine, which were also rare, included cases of:

All of these symptoms resolved without additional problems. More common side effects included:

Most of these reactions were mild, according to trial data, and resolved within a day or so after vaccination.