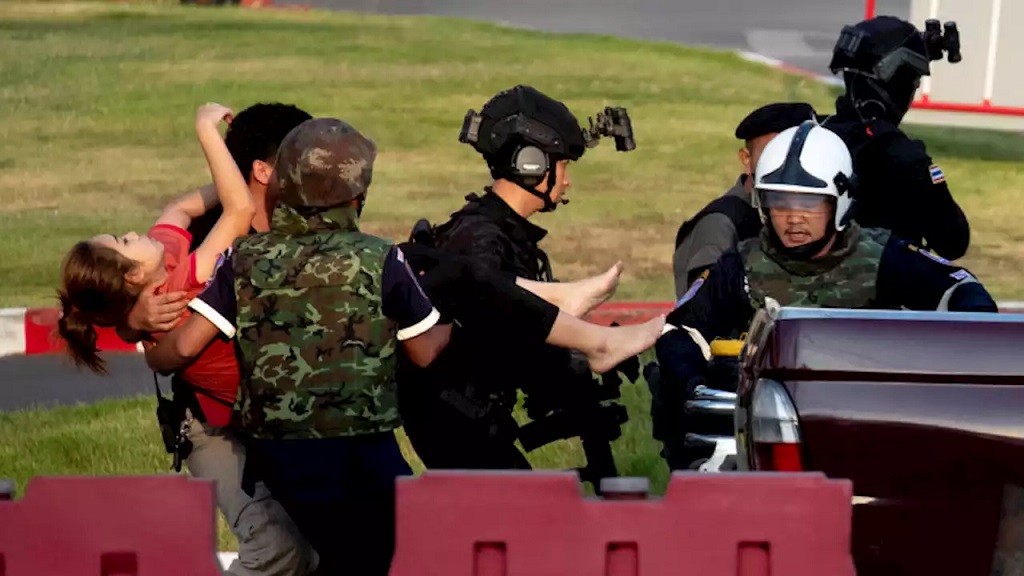 Thailand’s National police chief has told a press briefing that 27 people including the Thai Soldier were killed at the Terminal 21 mall in northeastern Thailand. Furthermore 57 were wounded, with 9 in surgery at hospital.

Commandos on Sunday killed Sgt Maj 1st Class Jakrapanth after he carried out a shooting rampage in Korat.

Volleys of gunfire rang out before dawn, hours after security services stormed the ground floor of Terminal 21 shopping mall. The gunman was held up with assault weapons stolen from his barracks, for more than 17 hours.

As police entered the mall, scores of stunned and terrified shoppers fled a bloody rampage. A rampage that the gunman relayed via Facebook Live.

The last casualty was a police officer who took part in a raid around 3am to force the Thai soldier out, said Health Minister Anutin Charnvirakul.

“He had been hit and unfortunately, he didn’t make it,” said Mr Anutin.

Shocked evacuees recounted how an ordinary Saturday shopping day at the busy mall descended into horror as the gunman entered.

“It was like a dream… I’m grateful I survived,” Sottiyanee Unchalee, 48, told reporters, explaining she hid in the toilet of a gym inside the mall as she heard the gunfire.

“I’m so sorry for those who died… (and) the people still trapped inside.”

Automatic weapon fire rang out just before dawn as ambulances prepared to evacuate the wounded in an attack whose motives remain unclear.

As shoppers ran for the exits late Saturday, police urged evacuees to “raise their hands” and identify themselves on the ground floor over fears the gunmen could hide among the desperate crowds.

Hours before the attack began on Saturday, Sgt Maj 1st Class Jakrapanth posted on Facebook, denouncing greedy people who took advantage of others and asking, “Do they think they can spend the money in hell?”

He relayed his shooting spree through Facebook Live and posts which charted the attack from the army barracks in the city to the mall.

In one Facebook video — since deleted — the assailant, wearing an army helmet, filmed from an open-top jeep, saying, “I’m tired… I can’t pull my finger anymore” as he made a trigger symbol with his hand.

A volunteer rescue worker recounted a bloody scene of horror after his team carried four corpses to the hospital.

“I just feel so sad. He is a soldier, he should not have fired at unarmed people.”
Stolen weapons

The bloodshed began Saturday afternoon when Sgt Maj 1st Class Jakrapanth shot three people. Among them at least one soldier — at a senior officer’s house and then at the nearby army barracks. Before driving an army vehicle to the town centre.

There the gunman used weapons stolen from the military arsenal to unleash carnage in the town centre.