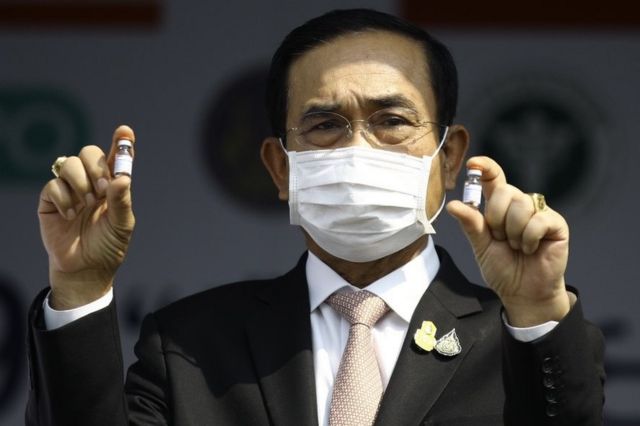 Netizens didn’t hold back criticism of  Thailand’s Prime Minister after he was seen photographed holding Sinovac vaccine bottles, which are highly sensitive to temperature. The pictures were taken during a welcome ceremony to receive the vaccines from China.

However, deputy government spokeswoman Traisuree Taisaranakul said Thursday morning that the Sinovac vaccine bottles were merely a “mock-up”, to allow the media to snap pictures of the ceremony.

After the short ceremony, the Sinovac vaccine was immediately taken to the Government Pharmaceutical Organizations Sripetch Building, DKSH (Thailand), for cold storage to await distribution to the first batch of people after the covid-19 vaccine is certified safe under the rules of the Centre for Covid-19 Situation Administration.

The first provinces to start giving the Sinovac vaccine jab will be Samut Sakhon, Chiang Mai and Tak. They will start vaccinating priority groups, including health workers, against Covid-19 from March 1.

The first 200,000 Sinovac vaccine doses will be inspected by officials from the Food and Drug Administration (FDA) and Government Pharmaceutical Organisation (GPO) for three days.

The vaccines will then be given to priority groups in 13 provinces with the highest infection rates, the greatest economic significance, or both. More than half of the Sinovac batch will be earmarked for Samut Sakhon, the epicentre of Thailand’s latest outbreak, and Bangkok.

Dr Jatuchai Maneerat, head of Chiang Mai’s Public Health Office, said the province planned to vaccinate 1,750 healthcare workers on March 1 and 41,750 people would be vaccinated by May. About 5,000 medical and health personnel will also be vaccinated in Mae Sot on March 1.

The first Covid-19 jab to be administered in Thailand will be given to Prime Minister Prayut Chan-o-cha on Sunday and it will be the AstraZeneca version.