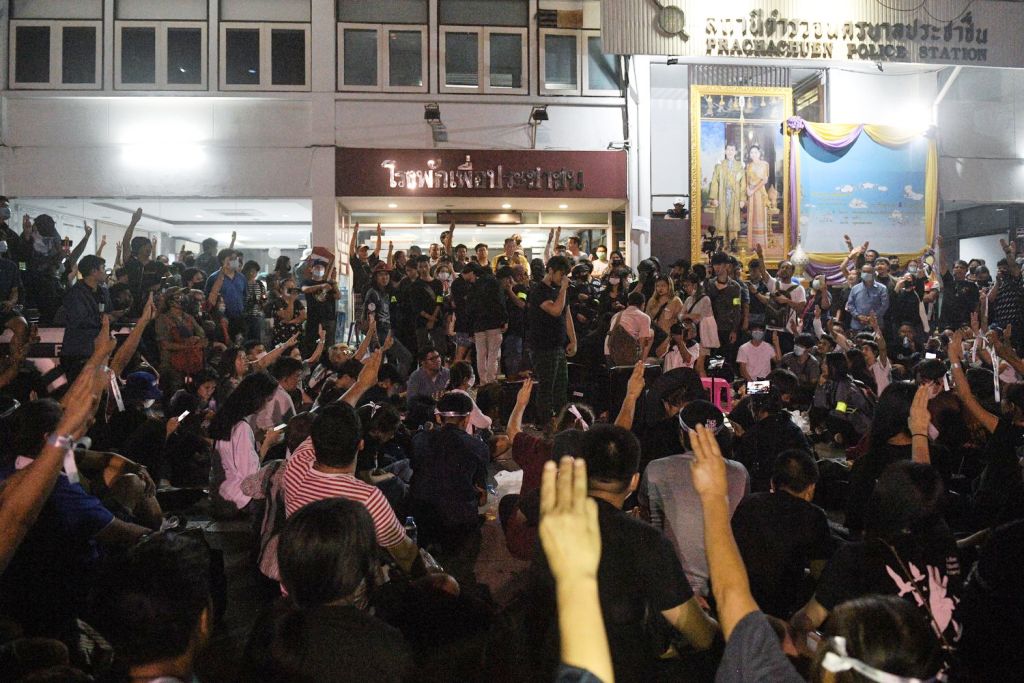 A criminal court on Saturday rejected a police request to detain three anti-government  protest leaders currently in a Bangkok hospital. The arrest attempt comes after an eventful night that followed their temporary release from custody.

The criminal court said the investigation was already done, so police could proceed with the case without having to detain them. Furthermore since they were in hospital they were not flight risks.


Police still have ample opportunity to make fresh arrests once the three are discharged. All told, there are 80 active warrants related to various offences connected with recent pro-democracy protests, according to Pol Maj Gen Piya Tawichai, deputy metropolitan police chief.

Pathumwan police, it turns out, were already on the case. Their officers were en route to the hospital around 6pm to charge Ms Panusaya, according to Thai Lawyers for Human Rights (THLR). It said on Twitter that its lawyer, who represents Ms Panusaya, had been informed.

Protest leaders Mr Parit and Ms Panusaya were taken to Praram 9 Hospital at around 4.45am on Saturday after they had been questioned by Ayutthaya police at the Pracha Chuen police station in Bangkok following their release from remand prison.

Mr Parit was injured with several glass fragments on his body and Ms Panusaya was exhausted. They joined Mr Panupong, who had been released at the same time and brought to the hospital earlier after fainting while in police custody.

At a briefing on Saturday, a team of doctors at the hospital said Mr Panupong suffered several minor cuts from glass fragments. He was very weak and physicians are checking what caused his blackout.

Mr Parit, who has asthma, also had cuts on his limbs and some glass fragments were found on his body. Ms Panusaya was suffering from severe dehydration and chronic sleep deprivation and was on a saline drip.

All three need at least two to three days to recover

Pheu Thai MP Tossaporn Serirak and Piyabutr Saengkanokkul, a former MP of the now-defunct Future Forward Party and cofounder of the Progressive Movement, accompanied them to the hospital in the same van.


The protest leaders supporters who had been waiting at the police station left after the leaders told them to return home.

Ayutthaya police on Saturday morning visited Mr Panupong, who was suffering from a lack of oxygen, at the hospital, seeking to detain him. Mr Panupong refused to be held, saying the arrest began at the Bangkok Remand Prison, not at the hospital, and he had the right to be treated there, according to Thai Lawyers for Human Rights (TLHR).

Late Friday afternoon, the Criminal Court had granted bail to the three student activists and Patiwat Saraiyaem, another protester, after repeated appeals by their lawyers. They had been in jail for 16 days.

Mr Panupong, Mr Parit and Mr Patiwat were detained at Bangkok Remand Prison and Ms Panusaya was at the Central Women’s Correctional Institution nearby.

Mr Patiwat walked out of Bangkok Remand Prison around 8pm to cheers from supporters waiting to greet him outside.

He frantically told the waiting crowd that the other three had been taken from their cells by three men in civilian clothes while prison officials did nothing.

The men were later identified as plainclothes police officers who acted on arrest warrants for the activists’ roles during rallies in Nonthaburi, Ayutthaya and Ubon Ratchathani provinces.

However, their lawyers, citing Section 68 of the Criminal Procedures Code, argued the warrants were no longer valid since they had already acknowledged and denied the charges while at the Border Patrol Police Region 1 and the Bangkok Remand Prison.

Pol Col Ittichet Wonghomhuan, the Pracha Chuen police superintendent, said his team acted on the warrants of Nonthaburi, Ayutthaya and Ubon Ratchathani police, who had not revoked them yet.

While the lawyers were still talking to some policemen at the prison, the plainclothes officers took protest leaders Mr Parit and Mr Panupong away through a secondary gate without anyone knowing, according to TLHR. Another van took Ms Panusaya from the women’s prison.

The van, with broken windows, took Mr Panupong and Mr Parit to the station at 9.30pm. Police did not allow them to get out at first since around 50 of their supporters were gathering there. Mr Parit shouted that Mr Panupong needed an ambulance immediately.

At 10pm, an ambulance took an unconscious Panupong to Kasemrad Pracha Chuen Hospital. He was later transferred to Praram 9 Hospital.

Dragged by the neck

At the police station, Mr Parit said he and Mr Panupong resisted arrest because the people who took them did not wear uniforms and tried to illegally detain them. However, they were dragged by the neck to the van. Mr Panupong passed out later in the vehicle, Mr Parit claimed.

He said the supporters who were following them tried to ask the police to stop the van so Mr Panupong could get medical help but the officials refused to do so. According to Internet Law Reform Dialogue (iLaw), some interviews and video clips showed what happened during the trip to the police station.

The van carrying Mr Parit and Mr Panupong stopped at a red light at the Pongpet intersection, followed by a few people on motorcycles believed to be their supporters.

Mr Panupong and Mr Parit shouted to them that they had been forcibly and illegally taken. Their supporters tried in vain to talk to the officials before attempting to break a window, allegedly to help the pair.

Other protesters remained in jail

As the van driver tried to get away, the vehicle hit at least two other motorcycles nearby. One of the motorcycles fell in front of the van but the van driver ploughed on, dragging the smaller vehicle for around 200 metres. The owner of the damaged motorcycle, who was not a protester, later filed a complaint with police.

After their temporary release on Friday, four other protesters remained in jail as of Saturday.

At Bangkok Remand Prison, Ekkachai Hongkangwan has been imprisoned since Oct 12 on charges related to the royal motorcade, Arnon Nampha has been held since Oct 15 on sedition charges, and Somyot Prueksakasemsuk has been detained since Oct 16.

At Bang Kwang Prison, Suranart Panprasert has been held at since Oct 21 on charges in connection with a royal motorcade. – Bangkok Post