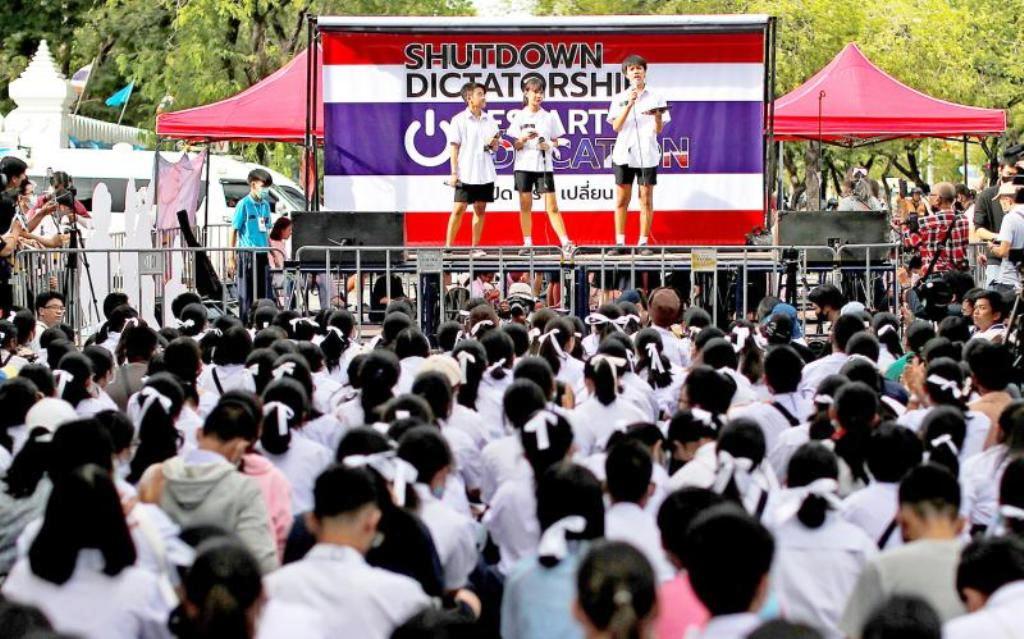 The Royal Thai Police have stooped to a new low targeting two teen students for joining a banned protest last month, in Bangkok. The teens spoke at a rally a day after the Prime Minister threatened tougher action against protesters.

The students said they had been summoned for violating an emergency decree by joining a protest on Oct. 15, when tens of thousands of people defied a ban by Prayuth aimed at halting protests demanding his removal and reforms of the monarchy.

“Even if you arrest protest leaders, there is not enough space in prison because hundreds more will rise up,” one of the students, 15-year Benjamaporn Nivas, told Reuters in an instant message.

The “Bad Student” group is planning a protest on Saturday and Benjamaporn said she would still attend. The other member of the group who faces charges is Lopanapat Wangpaisit, 17.

Thai Police spokesman Yingyos Thepjumnong said the two were summoned to acknowledge the charge and would be questioned in the presence of their parents and lawyer. Youth- and student-led protests since July have become the greatest challenge to Thailand’s establishment in years and dozens of arrests and attempts to quell them have so far only brought more people into the streets.

Prayuth has refused the protesters’ demand to resign and rejected their accusation that he engineered last year’s election to keep power he seized in a 2014 coup.

Protesters also seek to redraw the constitution written by his former junta and curb the powers of King Maha Vajiralongkorn, saying the monarchy has enabled decades of military domination.

The Royal Palace in Bangkok has made no comment since the protests began.

On Thursday, Prayuth threatened to use all laws to prosecute protesters who break them, raising concerns among activists that this could also mean harsh royal insult laws under which there have been no prosecutions for more than two years.

Although demonstrations have largely been peaceful, police used teargas and water cannons against protesters on Tuesday. At least 55 were injured from tear gas and six from gunshot wounds.

Another major protest is planned at the Crown Property Bureau on Wednesday. Protesters say they seek to reclaim the palace fortune, which the king has taken under his personal control.