Thai Police and Anti-Government Protesters Clash Outside of Parliament
Advertisement 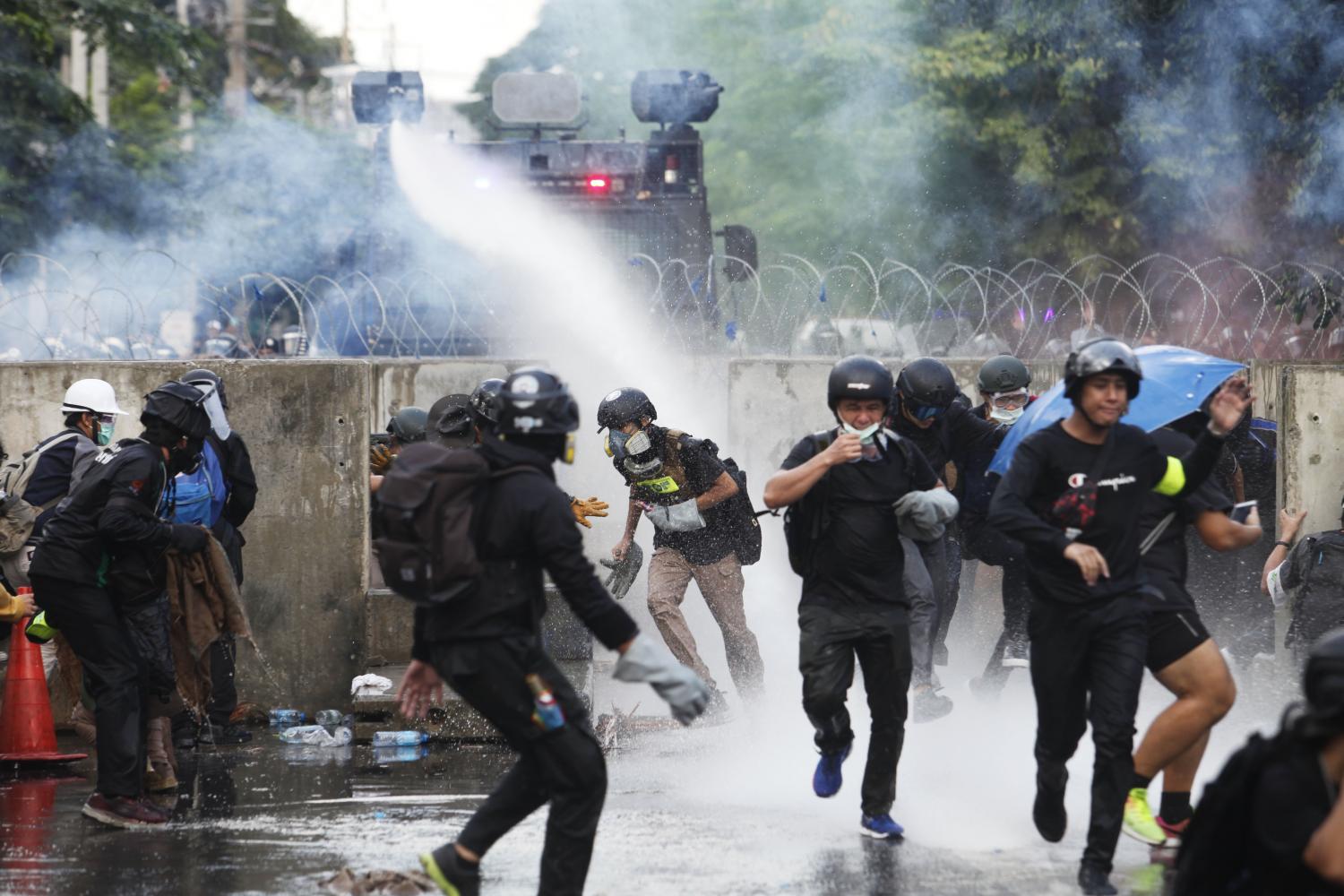 A group of demonstrators wearing helmets and other protective gear reached the line of concrete barriers and razor wire near Bang Krabue intersection in front of parliament at 2.30pm. They then attempted to breach the barricade.

After that brief confrontation, police tried to start negotiations with a representative of the approaching men, who were apparently acting as an advance guard for the demonstrators behind.

Pol Col Kissana Phathanacharoen, deputy police spokesman, said police warned demonstrators not to tear down the barricades and when they refused to back off police fired four more salvos from the water cannon.

The first three consisted of plain water. When that failed to deter the demonstrators, he said, police then used the water cannon to fire a liquid that included teargas.

Rally leaders earlier announced they planned to stay overnight outside parliament ahead of Wednesday’s decision by MPs on whether to accept for deliberation a proposed constitutional amendment drafted by iLaw. That is one of seven charter change drafts submitted to the parliament, the other six having been sponsored by government and opposition parties.

Parliament on Tuesday started its two-day debate on proposed constitutional amendments and legislators will on Wednesday vote on whether to accept any of the proposed drafts for deliberation.

Some lawmakers were forced to leave parliament by boat as government supporters and pro-democracy demonstrators clashed at the nearby Kiakkai intersection.

Members of the two groups threw missiles at each other at that location but riot police did not intervene, the Thai Lawyers for Human Rights Centre tweeted.

Protesters were held back by thousands of police standing behind barricades, who repeatedly used water cannon to fire teargas solution to prevent them from getting closer to parliament.

MPs, senators and parliament officials began leaving parliament on boats arranged by the Marine Department, from Kiakkai pier on the Chao Phraya River, at about 4.40pm.

Among them were MPs from both camps, including Pol Lt Gen Viroj Pao-in and Karun Hosakul of the opposition Pheu Thai Party, and Chada Thaiset of the coalition Bhumjaithai Party.

Police deployed more water cannons at the main gate on Samsen Road at about 4.30pm, taking the total number of water cannons used on Tuesday to four. Just after 5pm police withdrew their water trucks from Kiakkai intersection, whereupon demonstrators removed the barricades and barbed wire and occupied parts of the intersection.

Just before 8pm, anti-government protesters eventually broke through barricades and advanced towards parliament.

Protest leader Parit (aka Penguin) Chiwarak then declared “victory” as the protesters gathered outside parliament.

Police remained, however, to prevent demonstrators from entering the parliament premises. Earlier, police announced that they would use rubber bullets to stop the protesters if the use of teargas solution failed to stop them.

Protest leader Arnon Nampa later said on Facebook that police had indeed fired rubber bullets at protesters, although there was no immediate independent confirmation of his claim.

Further clashes broke out between anti-government protesters and yellow-clad royalists at about 8.30pm.

The Bangkok Metropolitan Administration’s Erawan centre reported last night that at least 18 demonstrators were injured and were being treated at Vajira Hospital.

Meanwhile, during day one of the debate in parliament, Wirote Lakkana-adisorn, a Move Forward Party MP, asked parliament president Chuan Leekpai to tell police not to use force against protesters and allow them gather near parliament.

However, Chaiwut Thanakhamanusorn, a Palang Pracharath Party MP, told the meeting that the protesters must not pressure parliament, while chief government whip Wirat Ratana­sate said that police must take decisive action against anyone who tried to storm the building.