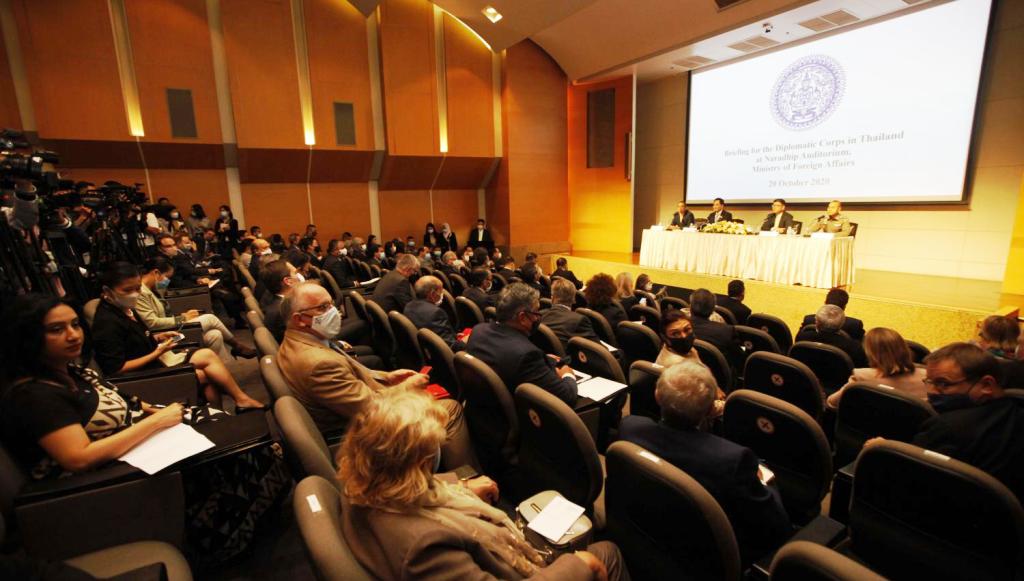 Foreign diplomats can go and observe the anti-government protests but they should inform the Ministry of Foreign Affairs,” spokesman Tanee Sangrat said. “Some embassies and international organisations have told us beforehand, some have not.” He also over emphasized that they could “observe, not take part in the protest.”

So far, the UN Human Rights commission and the Canadian embassy have informed the MFA of their intention to send observers.  The MFA has not warned embassies against sending staff to the protests. The foreign Ministry merely sent them letters informing them about the anti-government protests for the sake of their safety.

Mr. Tanee Sangrat was speaking after updating the media on the political situation and recent protests.

Thani Thongphakdi, the MFA permanent-secretary; government spokesman Anucha Burapachaisri; police deputy spokesman Kissana Phathanacharoen jointly briefed the diplomatic corps and international organisations on the current political situation in Thailand. They also played down the mass protests as well as the rationale behind last the state of emergency decree in Bangkok.

Mr Tanee, Director-General of the Department of Information and MFA spokesperson, was the moderator of the briefing. More than 84 members of the diplomatic corps and international organisations attended the briefing. Among them 37 ambassadors, including those from the US, EU, Canada, Germany, India and Russia.

The briefing of the Foreign Envoys was aimed at providing clarity about the anti-government protests. Also the necessity to introduce certain measures and how the government planned to respond to the protesters’ demands.

Mr Thani confirmed that the people’s fundamental rights to freedom of expression and freedom of assembly were guaranteed in accordance with Thai law. Despite the government ordering the arrest of protest leaders and charging them with sedition.

He said the government of Gen. Prayut also supported parliament’s right to explore ways of resolving the situation. Including through an amendment of the constitution.

He said the government’s next step would involve plans to ease the current tensions with the protesters. Saying his government would be considering opinions and requests from all sides. The government also hopes to foster mutual understanding between different generations.

Mr Tanee explained that the emergency decree had been necessary to preserve public order and safety according to international standards. Claiming that all police officers were carrying out their duties with restraint and careful discretion. Again he never touched on the subject of riot police unleashing water canons on peaceful protesters.

He said diplomats had asked about the likelihood of a special early parliamentary session, the role of the media at this extraordinary time and Thailand’s obligations according to human rights and international laws.

The protesters’ demand for the monarchy to be reformed had not been discussed in the briefing. No diplomat at the meeting embraced the subject. Mr Tanee said  he believed all demands would be discussed when parliament reconvenes. – Bangkok Post