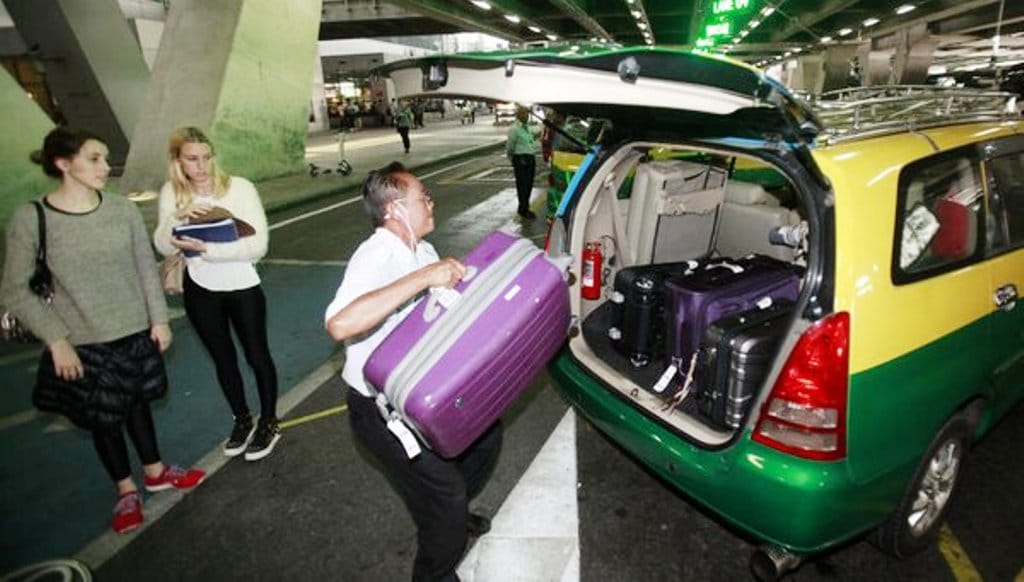 Taxi passengers travelling to and from Bangkok’s Don Mueang and Suvarnabhumi airports in Thailand are now subject to a luggage charge, according to an announcement published on the website of the Royal Gazette on Monday.

An order signed by Thailand’s Transport Minister Saksayam Chidchob on Oct 28, and which, became effective yesterday, permits taxi drivers to charge passengers between 20 baht and 100 baht extra for luggage.

Wheelchairs and other mobility aids such as canes are not considered luggage, nor are small bags such as small backpacks, laptop bags or small carry-on bags.

According to the announcement, taxi drivers and passengers have to reach an agreement on the charge.

Each case or bag more than 58cm (26 inches) in length or width is subject to an extra charge of 20 baht, the announcement said.

In the event a passenger has more than three smaller bags an extra charge of 20 baht per will apply to each bag over that amount.

Large pieces of luggage such as golf bags, bicycles, surfboards and musical equipment that are over 127cm (50 inches) in width or length are subject to a 100 baht charge per piece.

Pieces of luggage fastened together are counted as one piece and subject to a 100-baht charge.

Taxi Driver dies from overdose of drugs and Viagra

Police found alcohol, a pack of Viagra, “Marathon Rub” erection cream, and two unknown pills lying on the table next to the couch where Mr Thep was found dead.

Thep, a taxi driver, had taken a woman to his room, but he emerged an hour later to tell friends he was feeling unusually tired. Friends later found him unresponsive and naked from the waist down, Thai media reported.

“We have a sex party like this every month. He came to our suite and just slept on the couch while we partied – we thought he was just tired,” a friend said. “However, after I shook his body he wasn’t responding.”

Police found several bottles of whiskey and cans of beer in the hotel suite.Peanuts, fried chicken and dried shrimp were also found on the table. Detectives said the 44-year-old suffered a heart attack after having “energetic” sex and consuming a cocktail of alcohol and drugs.

After taking the Viagra pills, the “Marathon Rub” cream had also been applied to his penis, police said.

“There was nothing suspicious about the taxi drivers death at the hotel,” police spokesperson Namasphong Madha said. “However, it is embarrassing for his family as they did not know that he was there.”