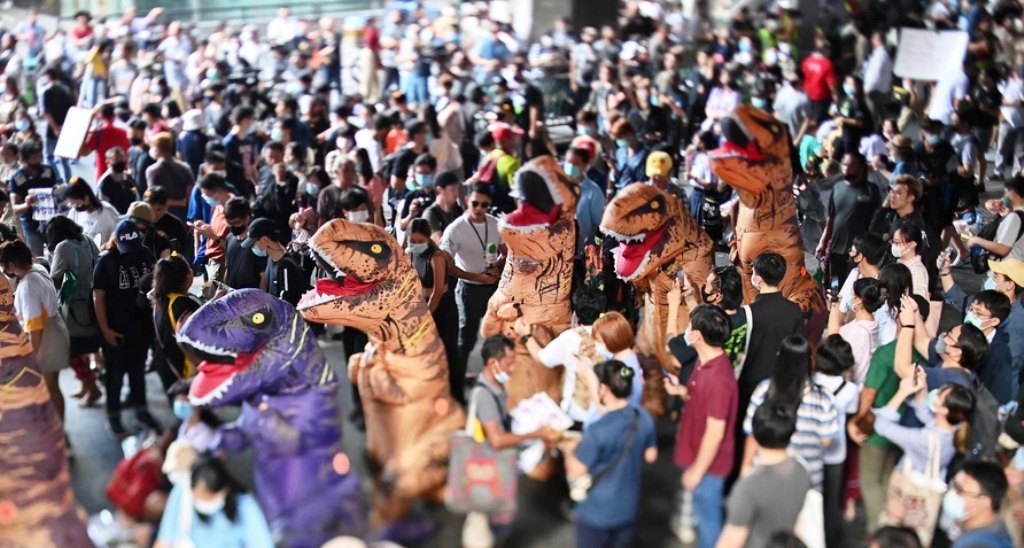 High school students protested in dinosaur costumes to represent Thailand’s establishment, led a protest by thousands of people in Bangkok on Saturday. The high School students are making calls to bring down the government of  Prime Minister Prayuth Chan-ocha and reform the monarchy.

It was the first major protest since Prime Minister Prayuth Chan-ocha said on Thursday that police would use all laws against protesters, who have become the biggest challenge to Thailand’s rulers in years.

Benjamaporn and another leader of the Bad Student group were summoned on Friday for charges over a previous protest, but police said Saturday’s demonstration could go ahead.

Protests since July have been around three core demands: the removal of former junta leader Prayuth as prime minister, a new constitution and reforms to the monarchy of King Maha Vajiralongkorn.

But the high school students also seek greater freedom and fairer treatment within an education system they say is archaic and aimed primarily at inculcating obedience. Many spoke of the importance of gender equality.

“I have been sexually abused by teachers. School is not a safe place,” said a placard held by one student who sat in uniform with her mouth taped shut in protest.

Government spokesman Anucha Burapachaisri said the prime minister hoped protesters would exercise their freedom constructively and within the law.

One of the hashtags used by the Bad Student group on Saturday translates as #ByeByeDinosaurs.

Dinosaur-costumed performers paraded to the theme tune of the Royal News, which is shown on Thai television every night.

But Benjamaporn said the students were being careful about references to the monarchy after activists took Prayuth’s comments on using all laws against protesters to mean the possible resumption of prosecutions under laws prohibiting insults of the monarchy.

Protesters have broken longstanding taboos with open criticism of the monarchy.

Prayuth has rejected the demand of protesters that he resign and their accusations that he engineered last year’s election to keep power that he first seized from an elected government in 2014.

The Royal Palace has made no comment since the protests began in July. When asked about the protesters earlier this month, the king said “we love them all the same” and described Thailand as a “land of compromise”.