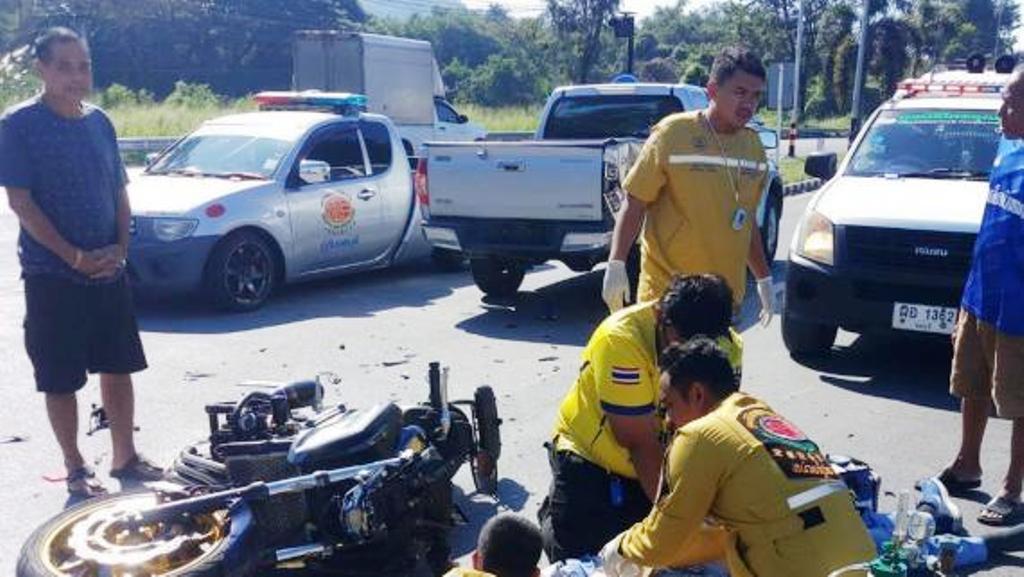 A speeding motorcyclist reportedly hit and killed a 64-year-old monk who was walking on the route to receive food offerings in central Thailand on Monday morning. The motorcycle was allegedly ridden by a 16-year-old boy who was in a hurry to bring his mother back from work.

The teenager told police he couldn’t stop his speeding motorcycle when he saw the elderly monk in his way.

The monk from Nong Prue temple in Chonburi Province was immediately killed while the motorcyclist’s left ribs were broken. He was later sent to Laem Chabang Hospital.

Police have ordered the detention of the suspect for prosecution his treatment at hospital.

Meanwhile, the Pattaya Mail reports a Chonburi man faces murder and weapons charges after allegedly shooting dead his neighbors over their dogs’ non-stop barking. Jirat Wuthimananon, 49, was charged with two counts of homicide for killing of Yotin Kaewfainok, 39, and his wife Boonyanee, 38, in front of their house in Samet, Muang District.

He’s also charged with illegal gun possession in Thailand and use after firing more shots wildly at an escaping dog and pedestrians near the house.

Somsak Manyuean, 57, confirmed that Jirat was enraged over incessant barking by the Kaewfainoks’ numerous dogs, which have been an ongoing problem in the neighborhood. Somsak said he hit and killed one of the dogs with his truck accidentally a while back as they were running wild.

Police said Jirat fired 11 shots in the episode, shooting Yotin first, Boonyanee second, then fired more bullets into Yotin for good measure. Then he shot at a dog running down the street and in the direction of people fleeing the area.