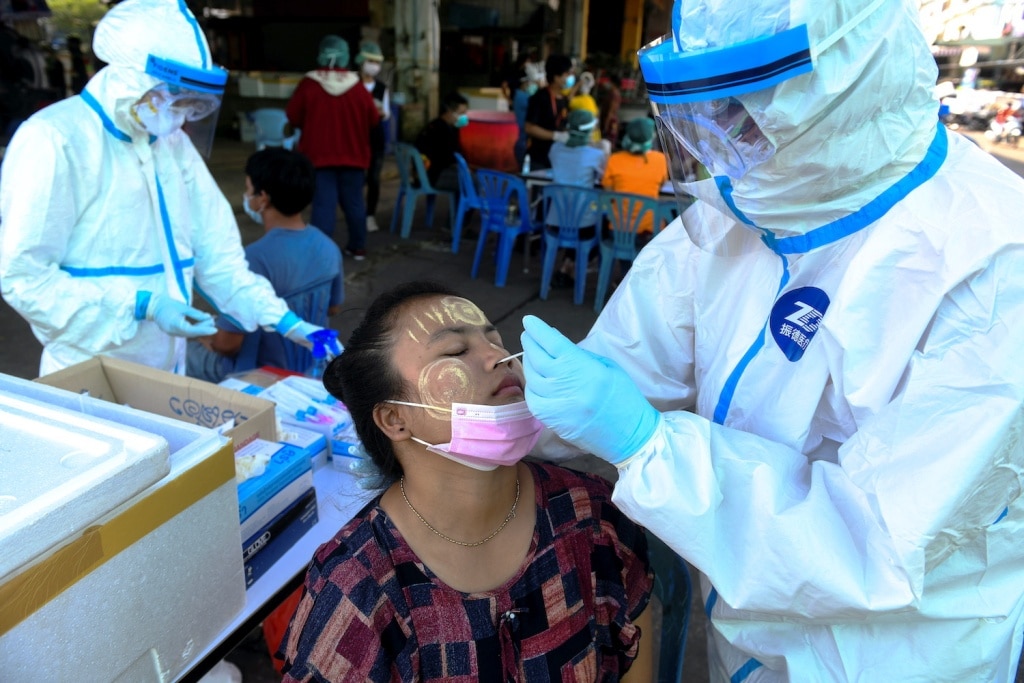 Health officials  have put the city of Samut Sakhon under lockdown with a curfew following a surge of more than 500 Covid-19 cases. The lockdown which took affect on Saturday is from 10pm to 5am in effect until Jan 3, 2021.

Dr Opas Karnkawinpong, director-general of the Department of Disease Control, said the 12 local infections initially reported earlier in the day had surged to 548. This followed after testing of 1,192 people in Samut Sakhon. Most of the cases were migrant workers from Myanmar.

“The rate of infection is 43% from tested people and 90% of them are asymptomatic,” he said during a televised briefing at 9pm Saturday.

“While there is a likelihood of finding more infections in crowded foreign communities around the shrimp market, they are low-risk groups because they are working age and healthy.”

The Ministry of Public Health, he said, had the capacity to handle the patients since the area was limited.

Dr Opas urged people in Samut Sakhon to refrain from going to other provinces.

Anyone who has visited the shrimp market since Dec 1 is also being advised to self-isolate for 14 days.

“If they develop a fever, cough, sore throat or lose their sense of smell or taste, they should seek medical help immediately,” he said. The seafood processing hub just west of Bangkok had been free of coronavirus cases for 250 days until this week.

The Covid-19 alert level would remain elevated until Jan 3, with the Talad Klang Kung or Central Shrimp Market and Sri Muang dormitory designated as off-limits areas so that disease control operations can be carried out, he said.

Other locations in the province that will be closed temporarily include all kinds of entertainment venues, sports stadiums, boxing stadiums, schools and other educational institutions, tutorial schools, shopping malls, cinemas and spas.

Restaurants and other food venues will be allowed to sell takeaway only, while convenience stores will be closed between 10pm and 5am, the order said. However, the local election would go ahead on Sunday as planned, along with other provincial council polls nationwide.

The spike in the province was the biggest one-day total by far in Thailand since the pandemic began. As of Saturday morning, the country had reported a cumulative total of 4,331 cases, ranked 152nd in the world.

The first of the new Samut Sakhon infections was detected earlier this week in a 67-year-old Thai woman who owns a shrimp wholesale business at the market. She had not travelled out of the country. Eight other infections have been linked to her, including three family members and five market workers, both Thai and Myanmar nationals.

The seafood industry in Samut Sakhon employs thousands of migrant workers from Myanmar. Public Health Minister Anutin Charnvirakul suggested on Friday that the infection could have originated in the local migrant community, given that Myanmar has seen a surge in Covid cases since September.

As of Friday, the neighbouring country had reported 114,000 infections and 2,400 deaths.

Moe Kyaw Thu from the Raks Thai Foundation, which is coordinating testing, said it aimed to screen 4,000 people over the weekend in Mahachai, the location of the giant seafood market.

“The population in Mahachai is roughly 70% Thai and 30% migrant workers, which means the source of the virus spreading could come from migrant workers, particularly Myanmese workers,” he said.

Just hours before the jump of 500-plus cases was reported, the spokesman for the Centre for Covid-19 Situation Administration (CCSA) had said a lockdown was not needed yet but but steps would have to be taken if cases keep rising.

“If the number of cases won’t come down [on Sunday] or the day after and become a cluster with unfound origins, we will choose measures from light to strong to handle it,” said Dr Taweesilp Visanuyothin.

The Sale and Distribution of Alcohol Banned During Provincial Elections