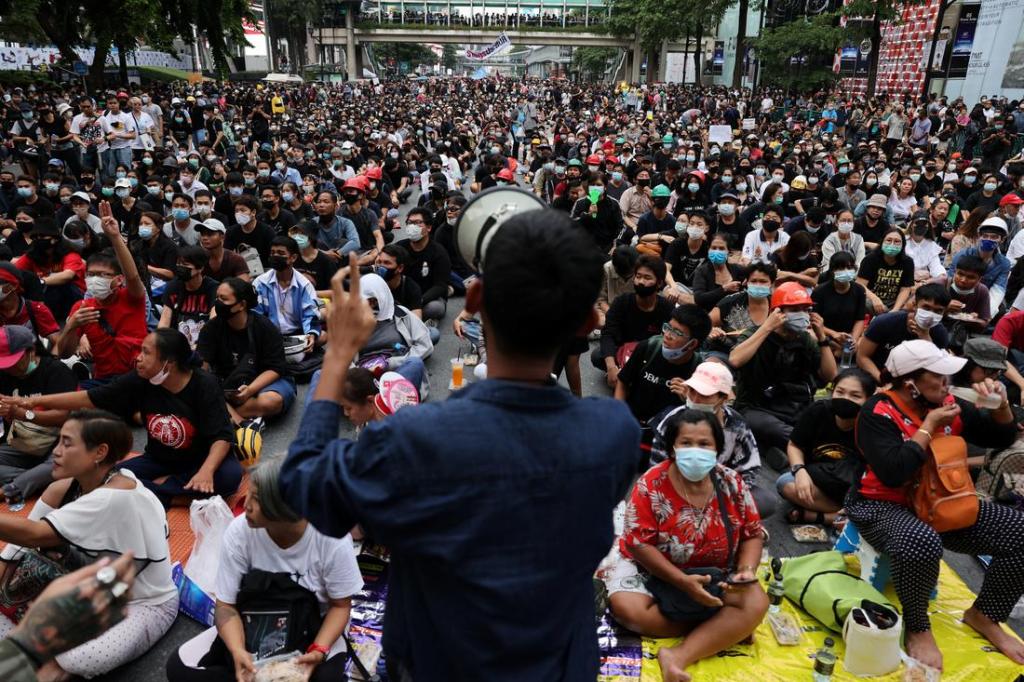 Roads around Ratchaprasong intersection were being closed on Sunday for a rally called by a group of anti-government allies.

Sunday’s demonstration was the first major show of force since Prime Minister Prayuth Chan-ocha ignored an overnight deadline from protesters to resign and since he withdrew the emergency decree measures that backfired by drawing bigger protests.

The Protests began in July to remove Gen. Prayuth, the former army ruler, have increasingly demanded change to the monarchy too. With anti-government protesters saying it has helped enable decades of military domination of politics. Bangkok’s top shopping area was transformed once again into a rally site by student-led protesters seeking to end the military’s longstanding domination of Thai politics.  According to the Bangkok Post, the rally started slowly, but gathered pace as a second stage was set up.

“If he doesn’t resign, then we must come out to ask him to quit in a peaceful way,” protest leader Jatupat “Pai” Boonpattararaksa told tens of thousands of people gathered in central Bangkok. Jatupat said the Ratchaprasong rally was to send a clear signal that Gen Prayut’s time as leader of Thailand was over.

Mr Jatupat said he had little hope that the crisis could be resolved in Thailand’s Parliament. He also said anti-government protesters would continue their peaceful demonstrations.

There was no sign of a major police presence around protesters at the Ratchaprasong Intersection.The intersection is an emotive location for protesters as the scene of bloodshed in 2010 in a crackdown by security forces on anti-establishment protests.

A government spokesman said there would be no use of force and called on people to remain peaceful and respect the law.

Meanwhile, a group of people dressed in yellow gathered outside Parliament and pledged to camp out there to pressure lawmakers to keep reform of the monarchy off the agenda in a two-day special parliamentary session starting on Monday.