Pro-Democracy Demonstrators Arrested Ahead of Rally in Bangkok
Advertisement 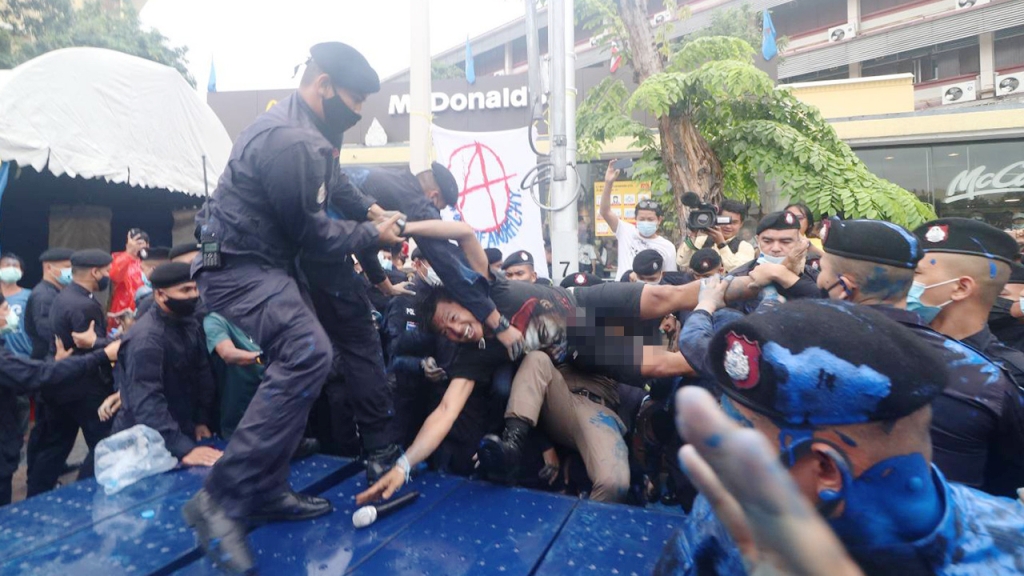 Pro-democracy demonstrators arrived early on Ratchadamnoen Avenue in Bangkok on Tuesday despite police’s request that they leave. Police said they were preparing for His Majesty the King’s motorcade Thursday.

The Khana Ratsadon group, an alliance of pro-democracy student and people networks, planned a major rally at the Democracy Monument on Wednesday. Its the 47th anniversary of 1973 popular rising which ended in a crackdown and 77 deaths.

Their three demands are Gen Prayut Chan-o-cha must leave as prime minister; an extraordinary parliamentary meeting must be called to accept a constitution-amendment bill from the people; and the monarchy must be reformed to be under the constitution.

On Tuesday, about 30 people from the group, led by Jatupat “Pai Daodin” Boonpatararaksa.  They set up tents in front of a McDonald’s restaurant close to the Democracy Monument. They also ignored police’s request to remove them but allowed police to check their belongings to ensure safety.

Both sides communicated through loudspeakers. Sitting on the roof of a pickup truck, Mr Jatupat claimed they had to set up the tents ahead of Wednesday.

It was earlier reported that Thailand’s King King would go to the Temple of the Emerald Buddha on Wednesday.His Majesty is attending the graduation ceremony for Pali scholars.

The planned rally has drawn reaction from Thailand’s conservative wing since Tuesday. Royalist activists, including Suthep Thaugsuban and Dr Rianthong Naenna, announced on social media on Tuesday that they would wear yellow and wait for the royal motorcade on Wednesday evening.  Yellow was the Thai traditional birthday colour of His Majesty the King.

Meanwhile, National police chief Pol Gen Suwat Jangyodsuk said police would assure that people would be able to pay their respects to His Majesty en route.

Pol Col Wacharawee Thammasema, a Special Branch police commander who supervised the vicinity of Government House, said police asked Pro-democracy demonstrators not to use Ratchadamnoen Avenue. Because it was the route of the royal motorcade in Bangkok, Thailand.

At about 1.30pm Pol Maj Gen Methee Rakphan, commander of the Metropolitan Police Division 6, and police from the Samranrat station arrived at the site to ask demonstrators to leave but to no avail.

Demonstrators and their leaders played music, sang and danced while police asked them through loudspeakers to step out of the road surface to end traffic blockage. Mr Jatupat “Pai Daodin” Boonpatararaksa then told followers to sit down. 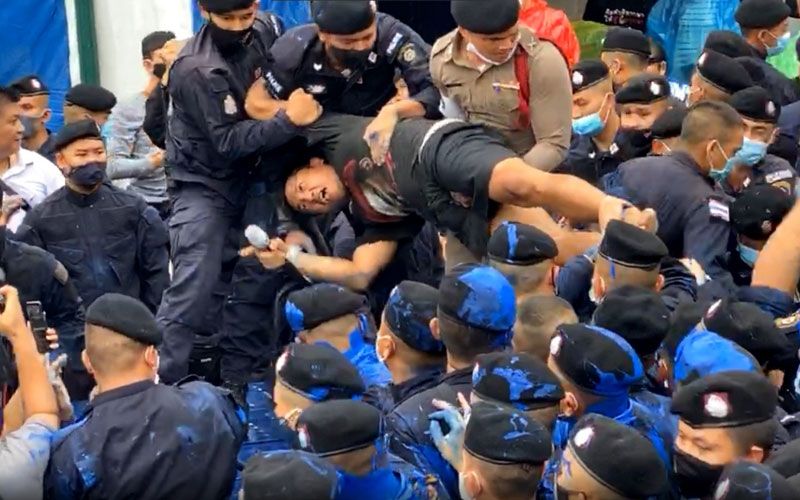 At 3pm, police again asked the demonstrators to leave. As Mr Jatupat resisted, about five companies of riot police were deployed. Some demonstrators splashed blue paint at them.

The leaders, including Mr Jatupat, and the demonstrators were arrested and brought out of the rally venue in Bangkok at about 4pm.

Among arrested demonstrators, singer Chaiamorn Kaewwiboonpan, aka Ammy The Bottom Blues, asked on his Facebook page that demonstrators should massively show up on Wednesday.

Deputy police spokesman Pol Col Kissana Phathanacharoen said 19 demonstrators were arrested for many offences, including the unauthorized organization of a rally. They were detained at the Border Patrol Police Region 1 in Pathum Thani province in Thailand.