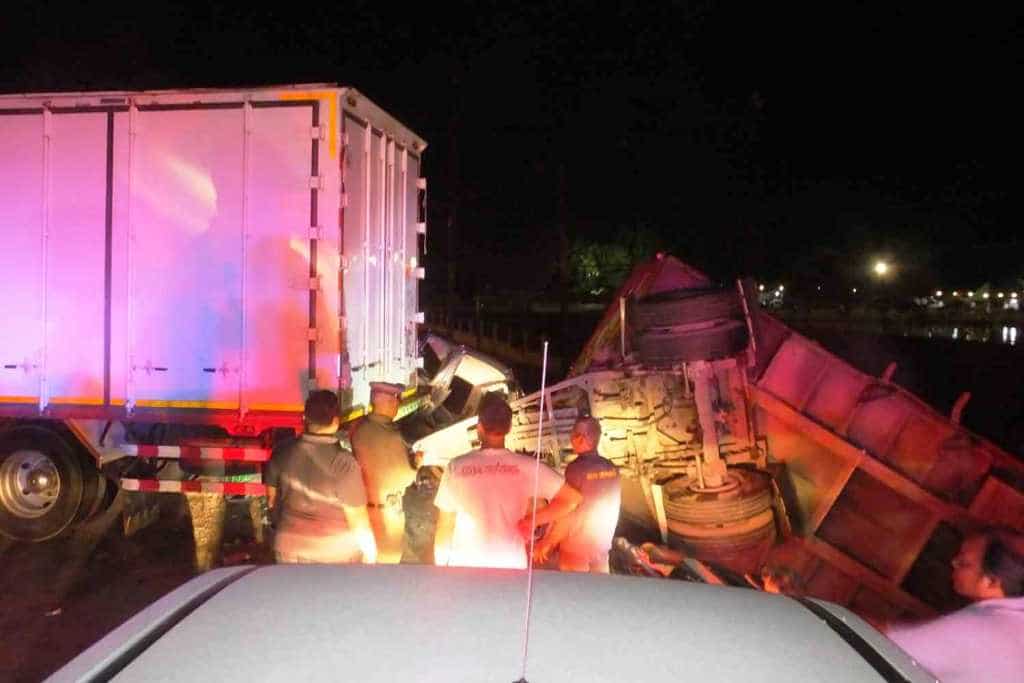 A pickup truck driver has been killed and his wife seriously injured when their pickup crashed into a swerving freight truck. The freight truck swerved and crashed blocked Highway 33 in Prachin Buri on Tuesday night.

Rampai Chaiyaka, 36, the freight truck driver, told police he was returning to Bangkok after completing a delivery, with empty containers on the back.

As he was approaching Prachin Buri town in light rain on a downhill stretch and braked to slow down on seeing an oncoming car. This caused the freight truck to swerve and slide across the slippery road, and end up blocking both sides of the highway.

A pickup coming in the opposite direction crashed into the middle of the freight truck. This caused a container to fall off the back. It landed on the roof of the pickup, crushing it.

The driver, Tan Buathong, and his wife, Panisa Sikane, were rushed to Chao Phraya Aphaiphubet Hospital in Prachin Buri. The husband was pronounced dead shortly afterwards.

Traffic on that part of Highway 33 was brought to a halt. The road was reopened around midnight, after the crash wreckage was cleared off it.

Isares Suwisuthicharoen, headman of Ban Hua Khao, said this section of the highway was prone to accidents because the four lanes suddenly narrowed to two lanes, one in each direction, forming a bottleneck.

Thailand’s cabinet on Tuesday approved a higher speed limit of up to 120 kilometres per hour on national and rural highways. Deputy government spokeswoman Traisuree Taisaranakul said the cabinet yesterday approved in principle a draft regulation on speed limits on highways as proposed by the Transport Ministry.

The regulation is applicable to highways with at least two lanes running in the same direction and traffic islands with barriers. The roads also must not have a ground-level U-turn slot. The new speed limits are expected to improve traffic flow, she said.

Smaller motorcycles will not be allowed to exceed 80kph, while those with 400cc engines and 35-kilowatt engines and above are limited to 100kph. School buses must not exceed a speed limit of 80kph.

The speed limit for vehicles travelling in the furthest right lane is no less than 100kph.