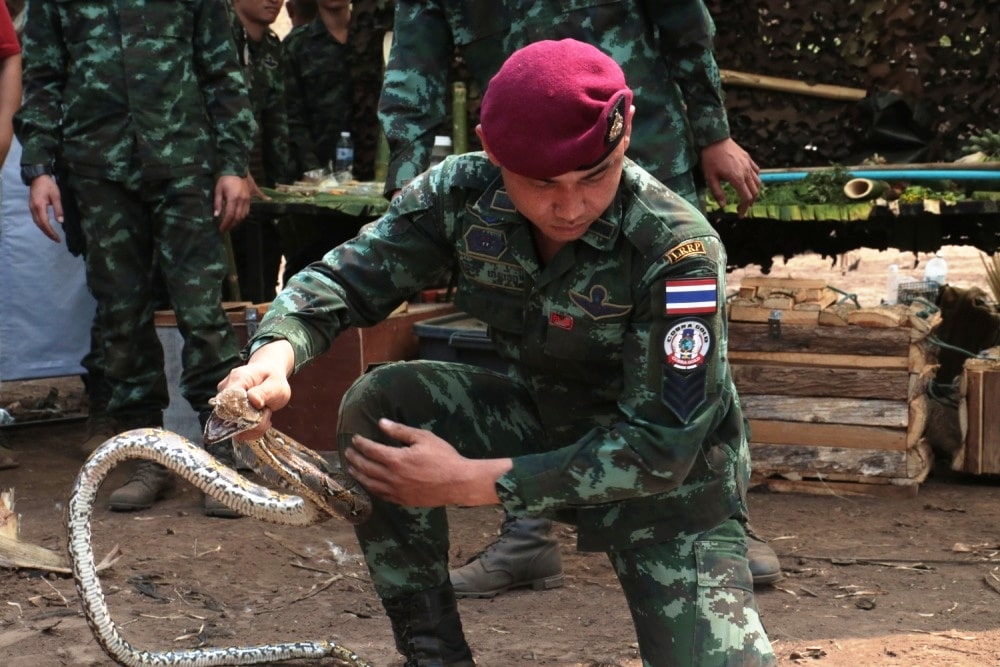 The Animals rights activists group PETA has urged Thailand’s Prime Minister to halt the drinking of snake blood at Cobra Gold Exercises. The People for the Ethical Treatment of Animals (PETA) sent a letter urging  Gen. Prayut to end the practice.

During Cobra Gold exercises, soldiers were recorded killing chickens with their bare hands, skinning and eating geckos, consuming live scorpions and tarantulas, decapitating cobras and drinking their blood.  PETA wants the ritualistic killing and consumption of these animals ended.

According to PETA the exercise also poses the possibility of a Zoonotic disease threat akin to the Covid-19 pandemic. The practice also endangers the king cobra, which is vulnerable to extinction, PETA said.

“In addition to creating a dangerous disease risk, Cobra Gold’s training exercises involving animals are both cruel and impractical,” PETA senior vice president Jason Baker said. “PETA is therefore urging Prime Minister Prayut Chan-o-cha to call for an end to the bloodlust killing of animals during Cobra Gold. Saying the practice sullies the honour of Thailand, risks public health, and endangers species which are vulnerable to extinction.

Soldiers at Cobra Gold learn essential skills necessary for surviving in a jungle environment, such as making a fire, eating plants and alternative ways to stay hydrated. Exercise Cobra Gold is the largest theater security cooperation exercise in the Indo-Pacific region and is an integral part of the U.S. commitment to strengthen engagement in the region.

Marines say they value the training as a learning opportunity and a way of bonding with their Thai counterparts. Thailand has been playing host to the exercise for nearly 40 years. And as much as ‘Marines drinking snake blood’ garners headlines while simultaneously driving animal rights activists up a wall, the practice can in fact keep someone alive, albeit as a last resort.

The Royal Thai Armed Forces run the jungle survival training during Exercise Cobra Gold,” said Army Lt. Col. Marty Meiners, adding that they would need to be contacted for more specifics. “The Department of Defense will continue to ensure we are employing best practices for the humane treatment of animals while accomplishing the need to prepare and train our service members for survival in any and all situations.

The next Cobra Gold exercise has reportedly been delayed until August because of Covid-19 concerns.