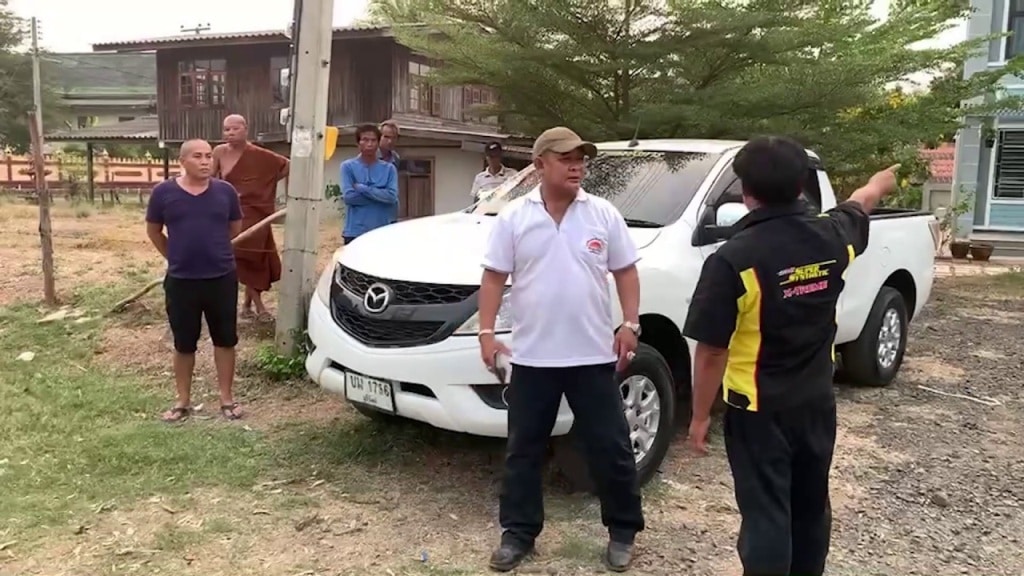 A 7-year-old boy is in intensive care after being struck by bullets fired at his fathers pickup truck by a jealous former inmate in northeastern Thailand’s Buri Ram Province.

Police told Thai media the shots were fired by a former inmate who allegedly believed the father had been flirting with his girlfriend. The father said the gunman, who is still at large, had targeted the wrong man.

Police said the shooting occurred on Charoensuk-Sawaisor Road in tambon Charoensuk in Buri Ram province on Friday evening. The police who rushed to the scene found the fathers pickup truck parked on the road.

There were six bullet holes in the driver’s side door, one in the windscreen and one in the front right headlight. Twelve bullets were found inside the vehicle and 15 cartridges were scattered over the road, Buri Ram police said.

Pakkhaphol Namwongsa, 7, the son of the driver, sustained serious wounds from bullets that struck his back. The boy was sent to Buri Ram Hospital, where he is in intensive care.

Mr Sombat Namwongsa, 47, the father of the injured boy, told Buri Ram police that he worked at the temple, where the pickup truck was kept for the abbot’s use. Mr Sombat said he had taken the truck out to be washed and was returning to the temple with his two sons, aged 5 and 7, when a man aged around 35-40 came alongside the pickup on a motorcycle.

The man suddenly cut in front of the truck and shouted “Why are you flirting with my girlfriend?” Then he started firing shots at the pickup.

Mr Sombat said he tried in vain to appeal to the attacker that there were children inside, but the man ignored him and fired more shots before fleeing on his motorbike.

His 7 year-old son son was hit by the bullets fired by the gunman, his younger son were unhurt. He immediately drove off to seek help from residents living nearby and have his son taken to hospital.

The driver told police that he did not know the attacker and had never had an affair with another woman. He believed there might have been a misunderstanding.

Police said they had obtained the identity of the suspect, a 37-year-old former drug inmate named Tu, who was released from jail a few months ago. They are still searching for him.