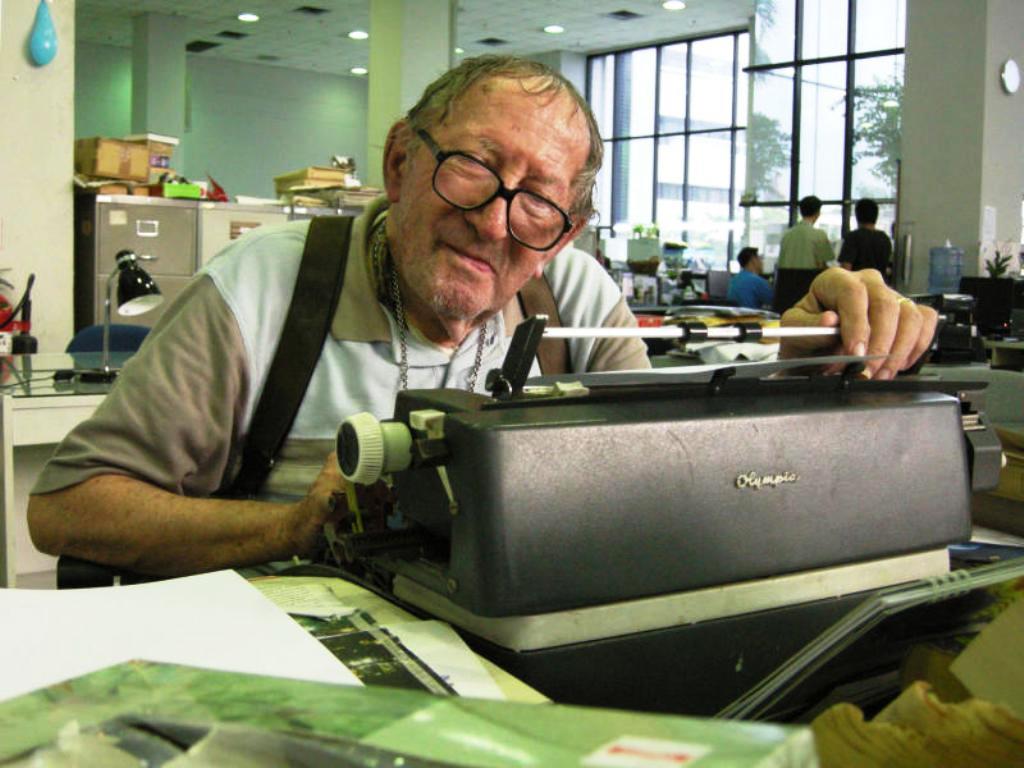 Legendary Bangkok Post columnist Bernard Trink, one of the most memorable figures with the Post, has passed away at the age of 89. Bernard had been ill and was being treated at King Chulalongkorn Memorial Hospital. He died on Tuesday night, said his loving wife Aree Trink at his side.

He is survived by his wife and two children, a son and daughter. His cremation will be held at Sala 5, Wat That Thong, at 2pm on Sunday.

Trink was best known for his Nite Owl column in the Bangkok Post. A freewheeling weekly chronicle of the seamier side of the city’s vibrant nightlife scene. The column had a devoted following, mainly among expatriates. Readers who voiced strong reactions pro and con to his lively articles. But even his most ardent detractors never missed reading one.

When he wasn’t combing local nightlife haunts for material, Trink had a prolific sideline as a book reviewer for the Bangkok Post.  He specialized in reviewing thrillers and spy tales. Every article was composed on a manual typewriter, at which he pecked away with two fingers.

Bernard Trink was born in New York in 1931. He came to Bangkok in the mid-1960s and taught English at various universities before taking over the “Nite Owl” column in 1966 at the now defunct Bangkok World, an evening English-language newspaper.

For the next 37 years, Bernard chronicled the comings and going of those who frequented or worked in the city’s go-go bars, nightclubs, pubs and massage parlors.

Trink was Blunt and not given to political correctness, he never ceased to give readers something to talk about. If the criticism bothered him, he never let on. He always ended every Nite Owl installment with the tagline: “But I don’t give a hoot!”

Trink first came to Asia during his military service in the Korean War in the early 1950s. He later worked as a journalist in India, Hong Kong and Japan before arriving in Bangkok.

“Nite Owl” began life in the Bangkok World as a three-page illustrated section that appeared every Friday afternoon. When the newspaper was bought out and shut down by the Bangkok Pos this column shrank to one page. It no longer featured racy photographs of local “demimondaines.” Trink’s signature term for the young women he came across on his rounds.

When he made those rounds — trousers hiked up almost to his chest, a loud shirt buttoned to the neck and an oversized amulet. Bernard was hard to miss. Anyone who frequented the likes of Patpong, Nana Plaza and Soi Cowboy knew who he was.

Another Trink contribution to the local lingo was “TIT” — “This is Thailand.” Expats still use “TIT” to explain away anything that baffles them about the country.

Over time, the material in his column grew more tame, but some of the views he expressed caused discomfort among higher-ups at the Bangkok Post. Senior executives contemplated stopping “Nite Owl” in the late 1990s. His fans mounted a letter-writing campaign and his “Nite Owl” column was saved. But further reduced to half a page.

While Trink spoke out for women’s rights, he viewed most bar girls as rapacious and untrustworthy, and warned foreign men about becoming romantically involved with them. Most controversially, his belief that HIV did not lead to Aids attracted considerable criticism and was regular fodder for letters in Postbag.

The end of “Nite Owl” finally came in December 2003, with no announcement or farewell party. But Trink continued to come to the newsroom once a week to write his book reviews. The last one appeared earlier this year.

“I didn’t want to retire,” he told writer Barbara Woolsey in a 2014 profile in Coconuts Bangkok. “Years passed, and I reached an age where I should retire. But why retire? I didn’t save any money. And there’s nothing out there I enjoy more than what I’m doing here, writing.”