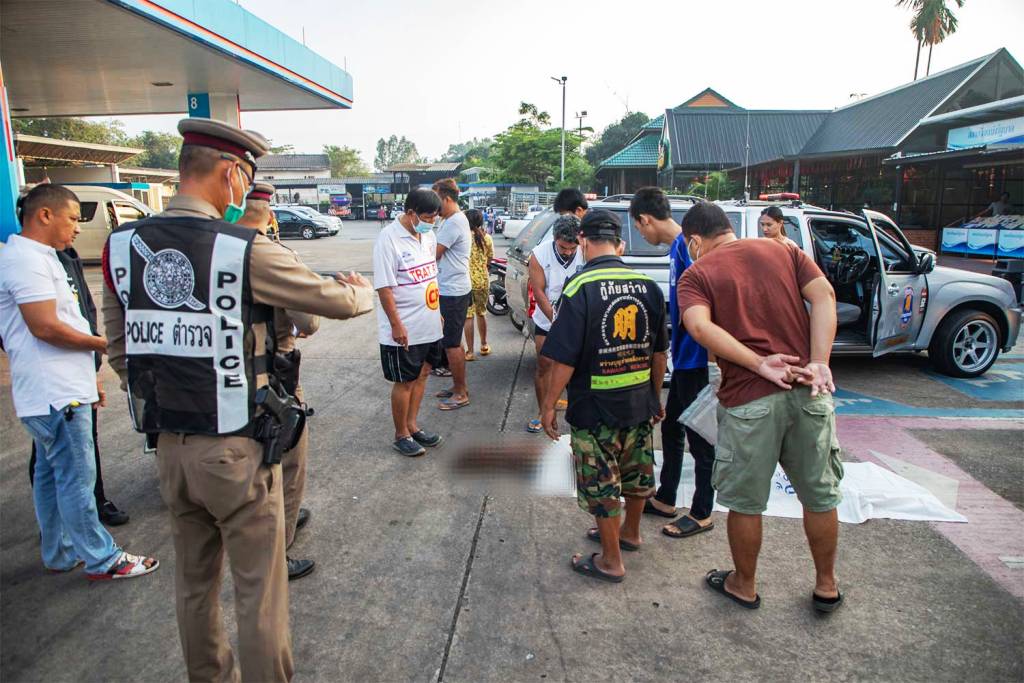 A group of holidaymakers were horrified after they found part of a human body caught under their car when they stopped at a petrol station in the eastern province of Trat on Friday morning.

The shocking discovery was reported from a PTT petrol station around 6.30am on Friday, Trat police said.

When Police and rescue workers arrived at he scene they found a parts of human body trapped underneath a Honda Jazz. Police said there was was no damage indicating the car had run into anything.

The Bangkok Post reported there was a torso, arms and legs, but no head, caught under the car.

The Driver Saharat Ploykhrut told police that he and nine friends were travelling together in four cars. They left Pathum Thani province on Thursday night, heading for a long-weekend holiday on Koh Chang.

After entering Trat province, they took a rest break at the petrol station.

As they were about to resume their journey, one of his friends noticed what looked like a body of some sort beneath his car, Mr Saharat said.

He and his friends initially thought it was a dead dog. He slowly backed the car off and away from the remains. They were horrified as it was revealed to be a human body.

Mr Saharat, who was travelling with his girlfriend, said he and his friends had seen what they took to be a dog carcass on the road 3-4km before the petrol station. It was dark and they could not see clearly what it was. Earlier, the Sawang Boonchuay rescue foundation in Trat had directed rescue workers to the scene of a reported road accident in nearby Khlung district of Chanthaburi province about 4.30am on Friday.

The rescue workers did not find anything on the road.

They began a fresh search later on Friday morning and found parts from a human body scattered along Sukhumvit Road and on the roadside. They collected the remains, hoping they could identify the body and inform relatives.

Trat police said Mr Saharat’s Honda car would be thoroughly examined at the police station. The other three vehicles also showed no signs of having hit anything.

The 10 holidaymakers said they would continue their journey to Koh Chang as planned, but in three cars. They would return to the police station to get Mr Saharat’s car after their holiday.