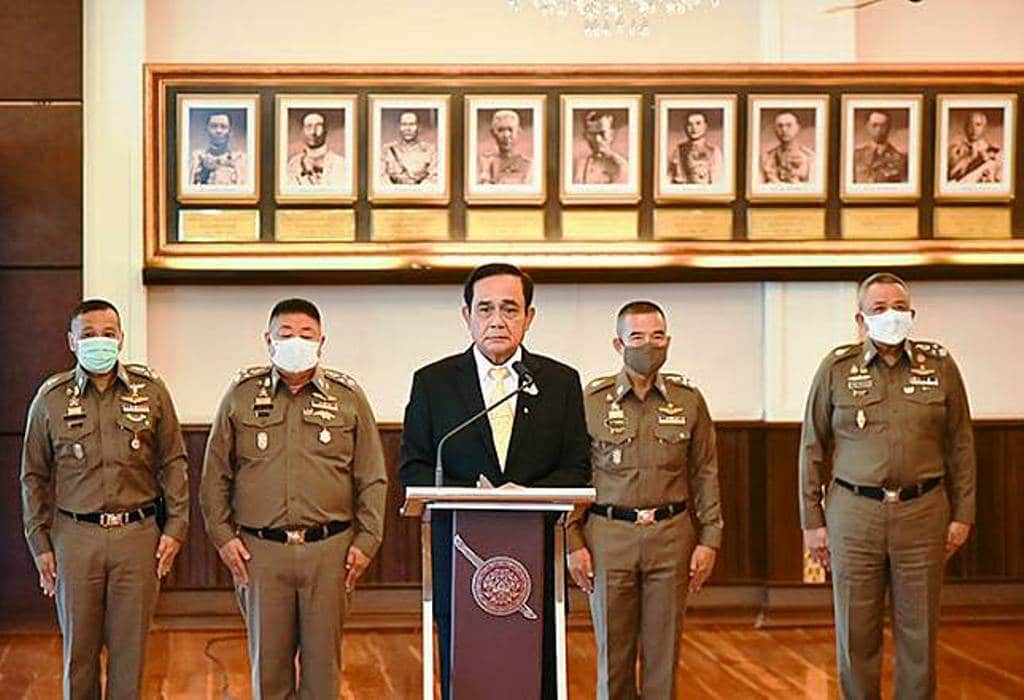 A Thai Lawmaker say the Royal Thai Police needs a major overhaul to tackle the long-standing problem of position buying among police. Alleged irregularities in police promotions were raised by the Move Forward Party (MFP) MP Rangsiman Rome during the censure debate in Parliament on Feb 19,2021

The opposition MP mentioned long-standing issues within the police force, including corruption and position buying as well as certain favours through what he called tua chang, or “elephant tickets”.

This is a fast-track promotion system where people, including the undeserving, avoid having to meet the criteria needed to earn promotion, he said.

Mr Rangsiman accused Prime Minister Prayut Chan-o-cha, who chairs the Police Commission which oversees the Royal Thai Police, of allowing such irregularities to occur under his watch. Such a malpractice existed also when Deputy Prime Minister Prawit Wongsuwon was overseeing police affairs.

The case in point, according to the MP, related to the so-called “police tickets” privilege that allegedly led to heavy jockeying for senior posts in the police force.

The privilege involved a waiver of some criteria set by the Police Commission, which led to promotions having been offered to undeserving officers.

Gen Prayut later came out to admit that there were problems within the force and he would tackle it, several days after the debate wrapped up.

The Bangkok Post has spoken to police sources, former police and criminologists to explain position buying in the force and how the problem can be addressed to promote fair promotions and transfers.

According to sources close to the matter, the recent annual police reshuffle did not attract much criticism about position buying within the force compared to previous reshuffles, though it still exists with positions being bought and sold secretly.

The reshuffle proceeded smoothly as officers who were unfairly transferred previously have now been given the posts they deserved based on merit under a policy imposed by new national police chief Pol Gen Suwat Jangyodsuk.

However, in the wake of the new surge of Covid-19 infections linked to illegal gambling dens in eastern provinces of Rayong, Chon Buri, Chanthaburi and Trat, position buying has been exposed with police alleged to have the financial backing of a major operator of illegal gambling dens.

The transfer of officers

On Feb 11, Crime Suppression Division (CSD) police arrested Somchai Jutikitdecha, aka Longjoo Somchai, at his house in tambon Muang Phra in Muang district of Rayong. He is believed to be a major operator of illegal casinos in the East that were blamed for enabling the spread of Covid-19.

Rayong was the epicentre of the new wave of Covid-19 wave in December. Health officials said the disease was spread by gamblers gathering at illegal casinos in the province and in adjacent Chon Buri province.

Following the crackdowns on gambling dens in the eastern provinces, several officers were transferred to inactive posts pending investigations. What is a ‘police ticket’?

Officers who seek to climb up the police echelons need a ticket — a reference or a stamp of approval from those power in the police force, politicians or businessmen, the sources said.

The ticket can be either a written reference or a verbal reference and the ticket will be sent to those responsible for compiling and submitting the list of promotions to those in power.

In some cases, officers who seek promotions did not need to spend money to get the ticket, but they received the ticket because they had served their bosses for a long time, the sources said.

When it comes to getting a “police ticket”, the sources said, it depends on how officers curry favour with their superiors. The higher position their bosses hold, the more tickets they have, the sources said.

For police who have no bosses to issue the ticket, they may approach politicians both in the government and opposition camps, who in turn would obtain the ticket from senior police, the sources said.

“Prices for positions vary, with the positions of police superintendents costing between 5-10 million baht,” the sources said.

Chartchai Na Chiangmai, a lecturer at the National Institute of Development Administration’s (Nida) school of human resource development, said the constitution stipulated that police reform must be complete within one year of the charter’s enactment.

The charter also stipulated that while a bill on the RTP is yet to become law, appointments and promotions must be based on seniority and other qualifications, Mr Chartchai said.

A bill promising to set in motion reform of the police sailed through its first reading in the House on Feb 24.

The RTP bill was passed on its second reading by a vote of 565 to two with three abstentions. The vote followed a debate where MPs expressed scepticism about police reform which the bill, presented by the cabinet, champions.

Some lawmakers said the bill would do little to deter politicians from meddling particularly in high-ranking officer promotions. During the debate, Akkaradet Wongpitakroj, Democrat MP for Ratchaburi, suggested the power to decide on police promotions, which rests ultimately with the police chief, be decentralized.

Politicians must not meddle with police

Pol Lt Gen Amnuay Nimmano, a member of a committee drawing up the bill governing the force, said he disagreed with the bill accepted by parliament at its first reading; that bill was amended by the Royal Thai Police.

Pol Lt Gen Amnuay said he favoured the original bill which was drafted by a committee headed by former chairman of the Constitution Drafting Committee, Meechai Ruchupan, appointed by the previous government. The bill aimed to solve the problem of position-buying and political interference.

Unless promotion criteria set by the Meechai committee — public satisfaction, seniority and capabilities — are adopted, jockeying for position among police officers will persist, Pol Lt Gen Amnuay said, adding politicians must not meddle if police reform is to succeed.

In 2017, the Royal Thai Police set up a panel to look into position-buying in the 8th Provincial Police Region. The panel found there were grounds to the allegation, though how much money was spent was not known, Pol Lt Col Krisanaphong said.