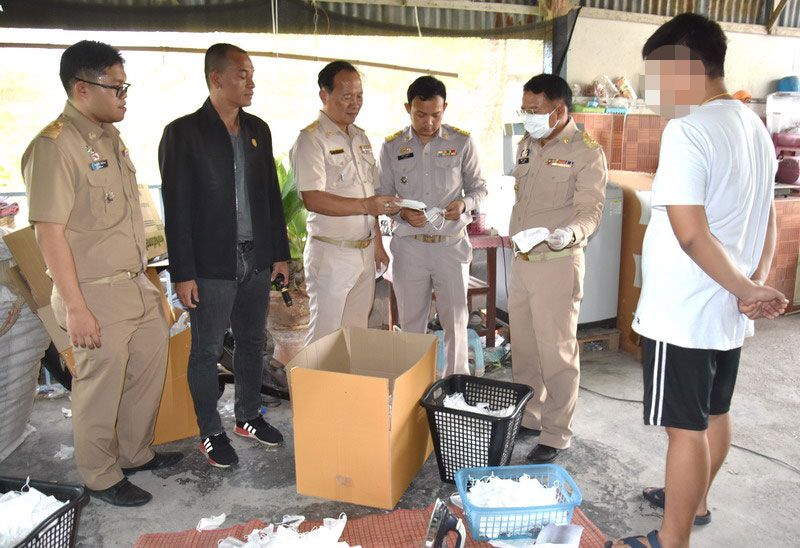 The Wiharn Daeng Chief District Officer Somsak Kaewsaena, Police Colonel Pairoj Trisopon in Saraburi Province and other related officials were called out to inspect the suspicious household on 2 March 2020 at 13.00.

The home was being used as a second-hand store that buys used goods and recyclable materials. The store bought and sold stainless steel, aluminum, plastic, and more, Thai media reported.

Officials found some of the teenagers were using an iron to flatten the masks out on a piece of wood. The masks were pulled tightly at all 4 corners then placed inside a clear plastic bag. They were being boxed up box before being sent out to the market.

Outside the house authorities found a big washing machine and 2 more irons. They also found big bags full of used medical masks that needed to be separated. It is estimated that there were tens of thousands used face masks.

The home belonged to Jintana Vichai 47 years old, who wasn’t at home when officials arrived. Kunanon 17-year-old the son was taking care of the recycling business. The teenagers wre paid 1 THB per mask that they recycled.

Washed, ironed and repackaged as new

The teens said they were able to recycle 300-400 per day. Kunanon stated that the masks were from a factory, but he doesn’t know exactly where. His mother takes care of the business and is the one who sells the masks.

When officials called Jintana, she claimed that the metal used in the face masks was being pulled out for recycling. She also said the masks were not being resold, however authorities believed otherwise.