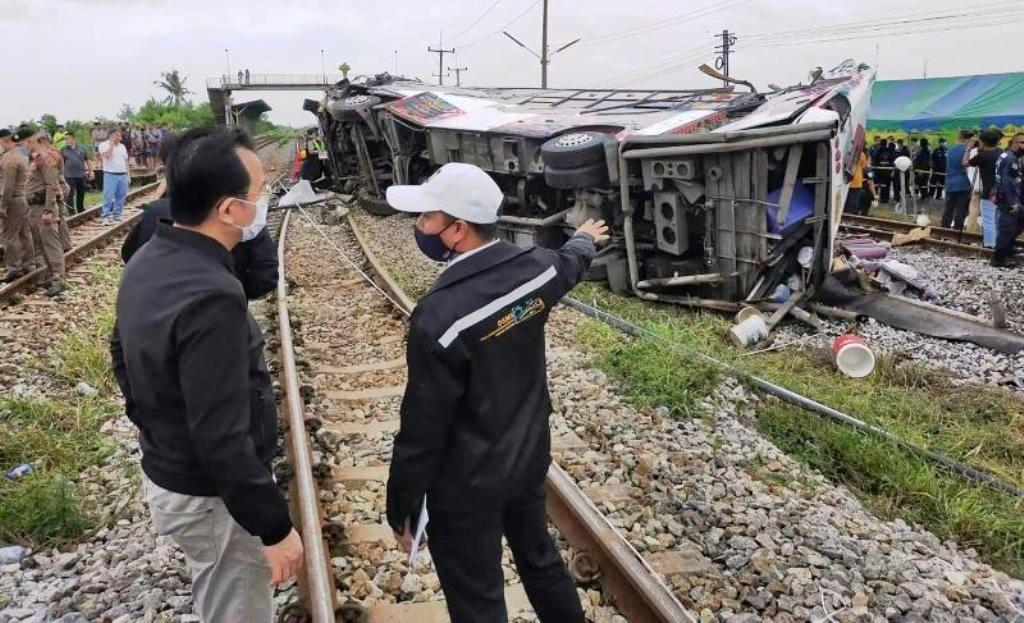 State Railway of Thailand governor Nirut Maneephan confirmed the death toll at the site of the crash to reporters.

Footage shared by a government department showed the bus edging from the road onto train tracks before a blue cargo train slammed into its side. Early images by rescue workers showed gnarled metal and debris, with bodies lying by the train tracks and people’s belongings scattered.

The bus was overturned on its side, the top of it was also ripped off, and rescue workers said a crane was needed to lift it.

The Freight train wastravelling between Laem Chabang and Hua Takhae railway stations when it struck the bus at the railway crossing in tambon Bang Toey in Chachoensao’s Muang district..

Witnesses said the railway crossing has no barrier, but they heard the noise of a train alarm shortly before the horrific crash. The bus was taking about 60 people from Samut Prakan province south of Bangkok. Eighteen people were injured after a chartered bus with 56 passengers including children crashed into the ditch in the median of the Asian Highway in southern Thailand’s Hat Yai district on Saturday night.

The 56 passengers were from Nathawi district of Songkhla. They had chartered the bus to take them to Wat Bangpho temple in Krabi province for a traditional tod krathin ceremony.

According to passengers, at about 10.30pm, on the way back to Songkhla, the bus veered off the highway and crashed into the median ditch. The chartered bus ended up lying on one side.

When rescuers arrived at the scene 18 passengers were injured, most of them slightly. They were admitted to Hat Yai and Songkhla Nakarin hospitals. The driver was not hurt according authorities.