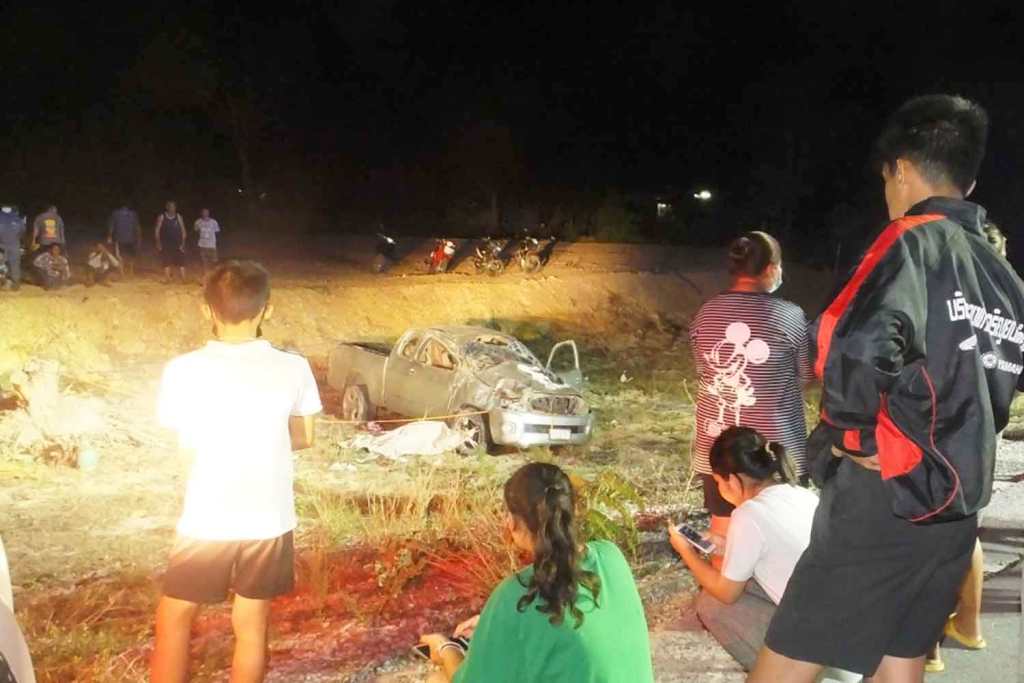 Police in central Thailand have reported that the driver of a pickup truck was killed and both passengers injured when the pickup veered off a road and overturned in Muang district of Prachin Buri Province.

The pickup, a Toyota Vigo, plunged into a dry roadside canal. The driver was found lying dead near the vehicle. He was later identified as Mr. Chalerm Saenthirak, 47.

One of the passengers, Mr Komkrit Tanchai, 37, was thrown out of the vehicle, and suffered minor injuries. The other passenger, identified only as Ae, was trapped inside the pickup and was seriously injured.

The injured passengers were rushed to Chao Phraya Abhaibhubejhr Hospital for treatment.

Mr Komkrit told police they all worked at a hardware store in Prachin Buri, and were returning to their homes.

As they neared Dong Yang Nai village, the driver swerved to the left to avoid an oncoming motorcycle. The pickup ran off the road and rolled over several times before coming to a stop in the roadside drainage canal. Meanwhile, a human skeleton was found in a shallow, muddy pond by a man gathering fish and frogs to eat near a village in Huay Rat district of central Thailand’s Buri Ram Province on Monday afternoon.

The discovery was reported to local police, and forensic investigators and rescuers were dispatched to Khok Krabao village in tambon Sam Waeng.

Upon arrival they found a skull and many other scattered human bones. When collected and laid out together, they made up a man’s skeleton.

Mr Niyom Intarakamhaeng, 42, told police he was digging up fish and frogs from the muddy pond bed, and stumbled across the skull. On looking around, he saw many other bones. He the informed the Kamnan of tambon Sam Waeng.

Police said the bones would be sent to the Forensic Medicine Institute for examination.

Villagers said the skeleton might be that of Veerasak Buahom, 34, from tambon Sam Waeng. He suffered from a mental disorder and lived alone in his house, but had disappeared five or six months ago.