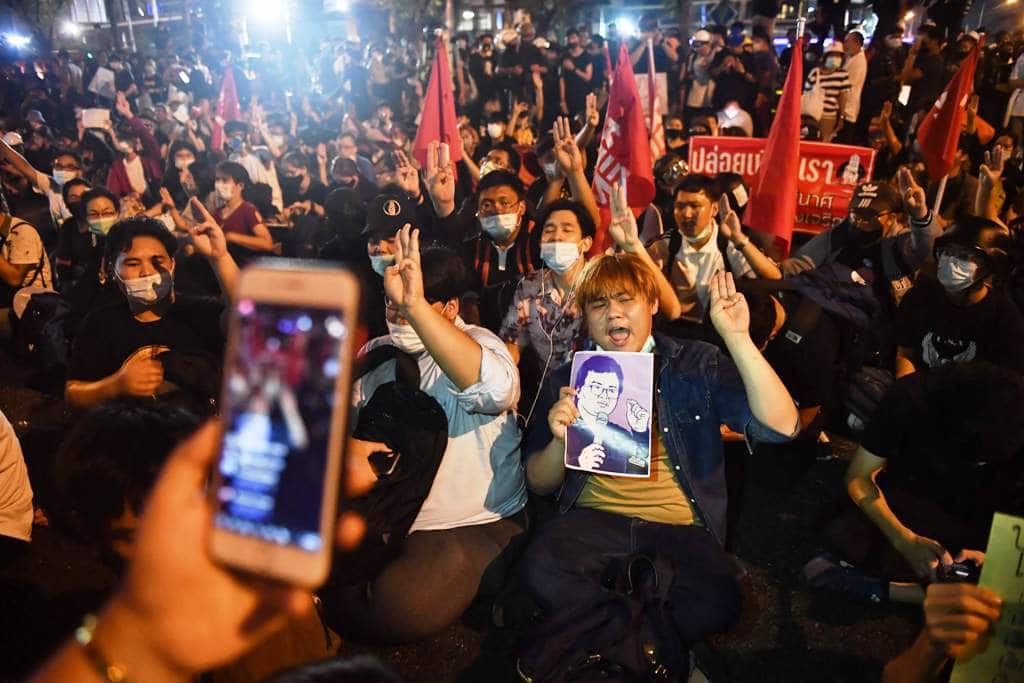 Three other politically themed rallies went ahead peacefully earlier in the day, but tensions were high at the protest staged by the group known as REDEM (Restart Democracy).

“Release our friends,” the REDEM supporters shouted in unison as they gathered in front of the court building on Ratchadaphisek Road, which was surrounded by barbed wire. A handful of small, symbolic fires were set and quickly put out by volunteers — but not before some people had set royal portraits ablaze.

The courts have repeatedly denied bail for detained co-leaders of the pro-democracy movement pending their trials for royal defamation and other charges. Judges cited their tendency to repeat the offence as one of the reasons, but the protesters say it goes against the principle of presumption of innocence.

Shortly before 9pm, organizers declared the activity over for the day, seeking to avoid a repeat of last Sunday, when their rally came to an ugly end with numerous injuries and arrests. They asked supporters to join a larger march planned by the Ratsadon pro-democracy group on Sunday.

Some demonstrators remained at the scene, and there was lingering anger over the arrest earlier in the evening of Piyarat “Toto” Chongthep, a leader of the volunteer guard group known as WeVo. He and three others were taken by men who claimed to be plainclothes police on the second storey of the parking building at Major Ratchayothin at 6.40pm.

Shortly after the arrests, demonstrators attempted to block two police vans leaving the area with an unknown number of detainees. They were taken to the Phahon Yothin police station and some protesters headed there to await further developments. All told, 14 people were said to have been arrested. It is not known whether charges will be pressed for violating the revised ban on public assembly. Convictions could result in up to two years in prison and/or a fine of up to 40,000 baht.

The announcement, published in the Royal Gazette on Friday, was more specific than a previous order, naming six provinces where the ban applies — Bangkok, Samut Prakan, Samut Songkhram, Nonthaburi, Nakhon Pathom and Pathum Thani. The previous order applied the ban based on disease-control zones, which have changed as infection rates are declining in most places.

Pol Maj Gen Piya Tavichai, deputy commissioner of the Metropolitan Police Bureau, told a news conference earlier on Saturday that police might not enforce the ban on gatherings immediately, so long as protesters were peaceful and did not trespass on or vandalise public or private properties.

However, he warned of harsher measures if protesters became unruly.

The following is a summary of the day’s other activities:

In northern Bangkok, the “Dern Talu Fah” march of activists, including the People Go Network, arrived in the capital after setting off from Nakhon Ratchasima on Feb 16.

Jatupat “Pai” Boontararaksa of the Dao Din group, led the march. Participants were joined briefly by 87-year-old Sulak Sivaraksa, one of the country’s most prominent social critics.

The marchers’ goals are the resignation of Gen Prayut Chan-o-cha as prime minister, the rewriting of the constitution, the abolition of the royal defamation law, and the release of fellow activists who have been detained under Section 112.

The group arrived at the Zeer Rangsit flea market in the morning and made a few stops along the way including at one at the state-owned ThaiPBS TV station before settling in at the Kasetsart University campus where they plan to spend the night and have a few seminars.

On Sunday they intend to complete their 246-kilometre journey with a march to Democracy Monument on Ratchadamnoen Avenue.

No clashes have been reported although they were stopped briefly by crowd-control police who wouldn’t let them use Vibhavadi Rangsit Road. They reportedly sat down on the road in protest and officers finally allowed them to continue on the route. Also in northern Bangkok, a pro-democracy group under the Ratsadon umbrella calling itself Progressive Red met at the Lotus Rangsit store at 1pm.

They had planned to march to the 11th Infantry Regiment but later changed their destination to Building B at the Government Complex on Cheng Watthana Road. They were stopped at 3pm by police who backed down a few minutes later. More crowd-control officers reinforced the existing team.

At the Big C Saphan Mai intersection, police formed a line blocking the protesters. They negotiated with the protesters to use Vibhvadi Ransgit Road instead of Phahon Yothin.

Sira Janejaka, the Palang Pracharath MP for Nonthaburi, gave a warning after hearing the protesters were planning to visit him at his house in the area.

“I warn you not to cross the line. This doesn’t mean I fear you. I just don’t want to see losses,” he said. “If you trespass on a private plot of land with an intention to hurt me or my assets, I can pick up arms to protect them as allowed by law.” The group dispersed at 7pm without incident.

In the capital’s shopping district, royalist groups met near CentralWorld to demonstrate the solidarity of people seeking to protect the institution.

They wore T-shirts bearing their groups’ symbols, with yellow the dominant colour. Many also tied ribbons in the colours of the national flag. Some wore green with a message saying they were independent defenders of the monarchy

A group calling themselves the Centre for Monarchy Defenders brought a vinyl banner with its symbol. On it was a signature which they claimed belongs to Her Majesty the Queen.

Many demonstrators claimed the burning of a royal portrait in front of Klong Prem Prison on Feb 28 was the last straw, according to the BBC. They took turns reading statements, most of which contained warnings for those who wish the palace ill.