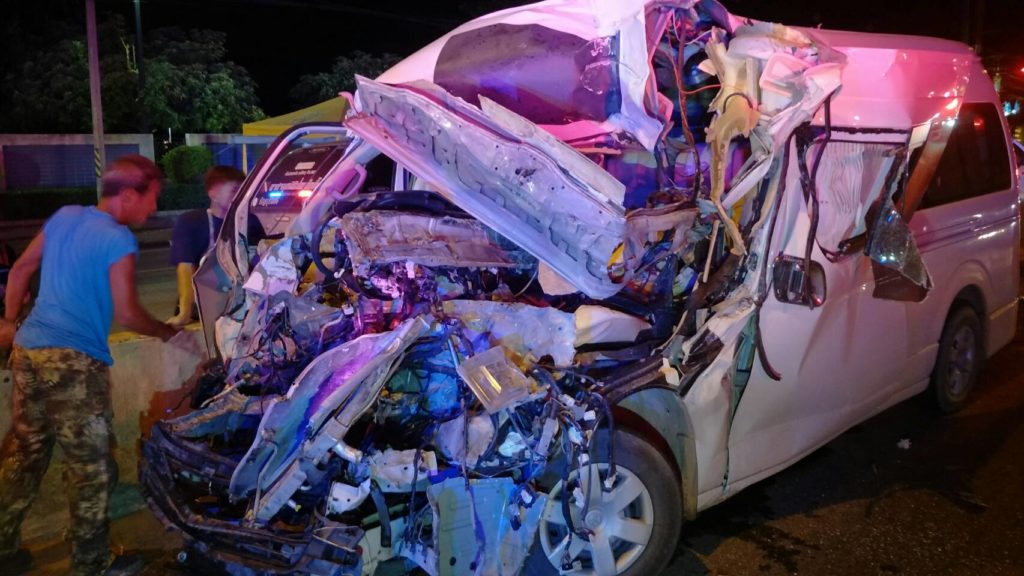 This is according to data compiled by the central road accidents claims company, Road Accident Victims Protection.

Mr Veera said many revelers were expected to start returning to Bangkok on Wednesday. Traffic on main roads would be heavier, he warned.

Six-wheeled ice delivery truck that smashed into a tree

Meanwhile, A 23-year-old ice delivery man exhausted from non-stop work early on New Year’s Day was killed after he dozed off while driving. His six-wheeled truck and smashed into a roadside tree in Kanchanaburi province.

Police were informed of the crash on Highway 323 on Wednesday. Rescue workers found Sa-ngob Klinnual behind the wheel of the overturned white Isuzu truck. The trucks front end was also crushed against a tree.

The truck was heavily damaged, with its roof also caved in and its windows and windscreen shattered. Sa-ngob succumbed to his injuries as rescue workers tried to extract him.

The victim was a resident of Sai Yok district in Kanchanaburi. His wife Nathawalee Sutthisinthong, 27, arrived at the scene and was overcome by grief.

She said her husband was an employee of an ice company in Ban Pong district of Ratchaburi province. She last saw him when he left their house at 1am.

“Before he left, I asked him if he was too tired to work. I tried to convince him to take a break but he insisted he could handle it. Then I received a phone call that my husband had driven into the tree,” Mrs Nathawalee said in tears.

She said that her husband could not afford to stop working. Police above all assumed Sa-ngob dozed off after making continuous ice delivery trips during New Year’s.