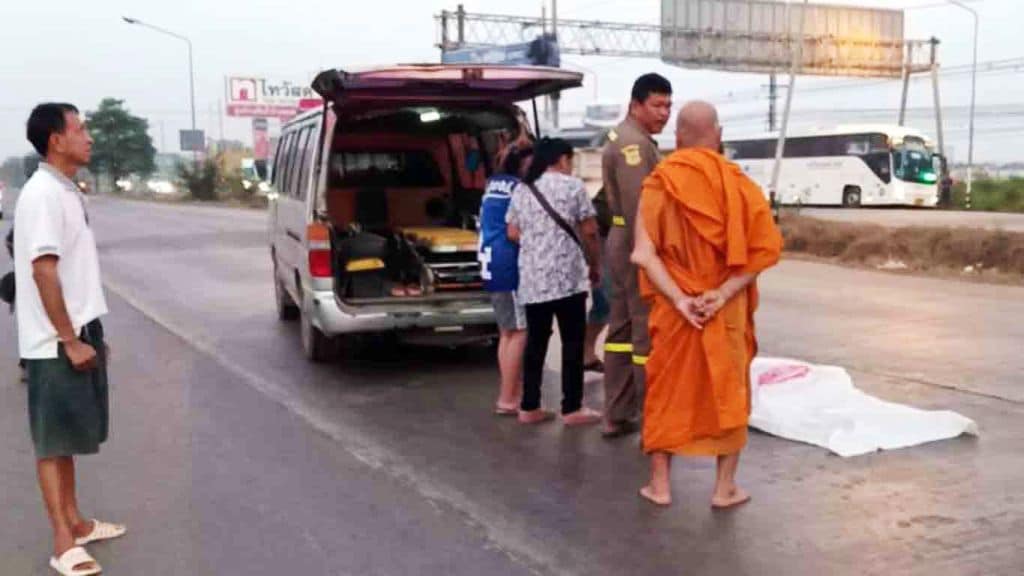 A 59-year-old Buddhist monk was killed after a pickup truck struck him while he was crossing the road to collect alms in central Thailand. The fatal accident occurred at a road crossing in Sri Maha Phot district of Prachin Buri at around 5.50am on Saturday morning.

Phra Thanit Thanaseelo, 59, of Wat Mai Naboon in Sri Maha Phot district, was found lying dead on the road near the pickup.

Driver Charoon Niyompong, 48, told police that he had just left a petrol station and was about 100 metres past the intersection when he saw something indistinct in the middle of the road and his vehicle suddenly struck it. He said he was shocked when he discovered he had hit a monk.

He waited for police at the scene, telling them visibility was poor when the accident occurred.

A fellow monk told police that Phra Thanit often rode a saleng tricycle from the temple to collect alms in front of the Khlong Rang market and nearby areas. Before the accident, Phra Thanit had parked his saleng along the road before crossing the road to the opposite side.

Meanwhile, five-year-old Thai twins were married to fulfill a superstitious Buddhist belief that they were lovers in a past life.  Washirawit Bee Moosika and his sister Rinrada Breem had the wedding ceremony at home in Nakhon Si Thammarat, Thailand on March 4.

Their parents, Weerasak, 31, and wife Rewadee, 30, follow Buddhist teachings which claim that all twins are born together because they have ‘karma’ from a past life in which they were lovers whose relationship ended before they could wed.

They believe that unless twins are married at the earliest chance, their lives will be haunted with bad luck lingering from previous incarnations. Weerasak and his wife Rewadee invited friends and relatives to witness their son and daughter’s marriage.

Proud mum Rewadee said: ‘I feel so lucky to have twins but I’m concerned that there is something following them from their previous lives. Our belief is that they should be married in order to clear that karma.’

The twins’ colourful wedding ceremony followed a traditional Thai wedding with parades, dancing, and offering of dowries from close relatives.

A Buddhist monk was also present to chant blessings during the toddlers’ unusual union. Twins married due to belief they were ‘lovers in a past life’