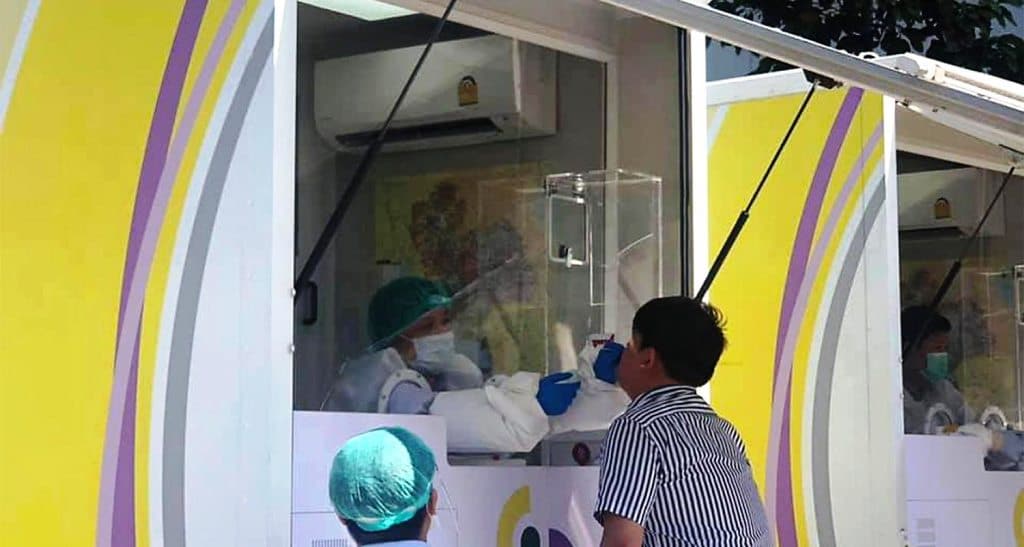 Thailand’s Public Health Ministry announced its stepping up Covid-19 surveillance and testing in Bangkok following a spike in covid-19 cases, a senior official said on Friday.

Dr Chakkarat Pittayawong-anont, director of the epidemiology division at the Department of Disease Control (DDC), said public officials are ramping up proactive screening in six districts after a large number cases were confirmed.

He said the cases are linked to factory workers and surrounding communities in Phasi Charoen district. However there is no indication that the virus has spread to schools or to the public transport system.

“Residents in these districts are advised to take extra health precautions, particularly wearing face masks when visiting markets,” he stressed.

Pongsakorn Kwanmuang, spokesperson for the Bangkok Metropolitan Administration (BMA), said on Friday that so far the “Sentinel Surveillance” programme launched in the six districts had uncovered 54 new infections.

To help with contact tracing and disease control, the workers are now required to download and use the “Mor Chana” application, he said.

Dr Apisamai Srirangsun, assistant spokeswoman of the Centre for Covid-19 Situation Administration (CCSA), said a study on viral infections in urban communities indicated that people are more at risk of contracting Covid-19 from social gatherings and at work places than anywhere else.

She said an investigation into Covid-19 infections at a beauty clinic in Bangkok, where five out of seven workers were infected, found the group had meals together every day and shared utensils.

Another investigation into infections at a department of a company also in Bangkok showed that the employees had not not worn face masks while socialising. The department had 10 employees of whom nine had tested positive.

According to the Bangkok Post the CCSA on Friday reported 586 new Covid-19 cases across the country — 573 local infections and 13 imported, raising the total to 22,644.

Bangkok had 18 new cases, all testing positive at hospitals, comprising 14 Thais and four Myanmar people. Samut Sakhon province continued to record the highest number with 548 new infections, although that marked a decrease from the 700-800 a day being reported last week.