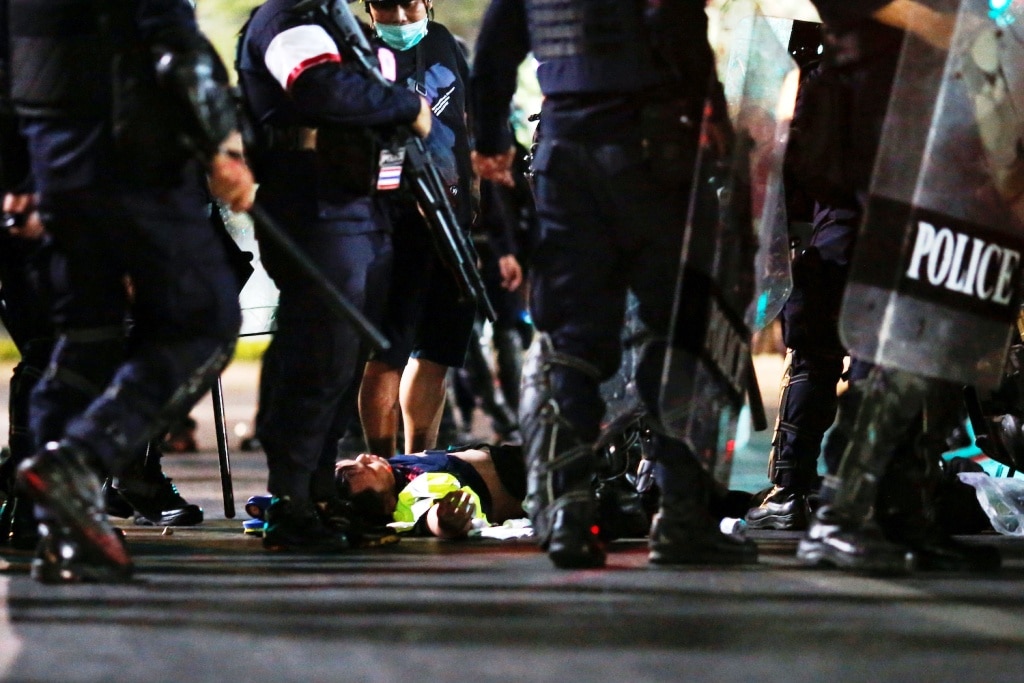 Bangkok police are under fire for attacking a volunteer rescue worker during a anti-government protest on Saturday night that ended with eight demonstrators detained and 20 wounded.

A group representing doctors who work in provincial hospitals issued a statement on Sunday denouncing police for beating a medical volunteer outside the Supreme Court compound near Sanam Luang. The group, the Rural Doctor Society, demanded explanations and legal action against those responsible, saying it was a serious violation of human rights.

The group added that it opposed violence by all parties during rallies.

The #policebeatingmedic hashtag in Thai has topped Twitter trends after a video clip widely circulating online showed officers in full riot gear chasing down a man wearing what appeared to be a yellow volunteer medic vest, with at least one officer beating him with a truncheon as he fell to the ground.

Until all police officers who abused people are punished, I will hold my grudge for them! #ม็อบ14กุมภา #ตํารวจกระทืบหมอ https://t.co/hQsn3l5Hm5

Metropolitan Police Bureau commissioner Pol Lt Gen Pakkapong Pongpetra on Sunday defended officers, saying the man was near the scene of the clash between police and the demonstrators. Saying authorities warned them to end the anti-government protests.

The protesters were calling for the release of the four leaders of the People’s Movement. The Rally started at Democracy Monument before the activists marched to the City Pillar Shrine near Sanam Luang.

Riot police formed a barrier outside the premises of the Supreme Court.

The four anti-government protest leaders were allowed to enter the shrine by Bangkok Police to pay homage and seek blessings for the demonstration. Some protesters waiting outside clashed with police. Bottles were thrown and smoke filled the air.

With the first stage of negotiation failed and the police refused to turn off their spotlights, the protestors began throwing stuffs at the police. #ม็อบ13กุมภา #ม็อบ14กุมภา pic.twitter.com/j62vi2BVpU

The city police chief denied that officers fired tear gas during the scuffle, although tear gas cans were found at the scene. Anti-government protesters briefly clashed with police on Saturday after draping Democracy Monument in red cloth. (Reuters video)

The People’s Movement on Sunday issued a statement reiterating its peaceful stance but said protesters had a right to retaliate against violence by authorities, provided that their actions did not pose a danger to others.

The Erawan Emergency Medical Centre reported 20 people were injured during the rally.

Police said eight demonstrators were arrested on multiple charges, including defiance of the emergency decree.

Anti-government protesters are planning to hold a mass rally on Feb 20 to demand the release of their four leaders. They also vowed to escalate rallies unless the leaders are released.

The political situation was tense after Parit Chiwarak, Arnon Nampa, Patiwat Saraiyaem and Somyot Prueksakasemsuk were detained on Tuesday after the Criminal Court denied them bail. They face lese majeste and sedition charges.