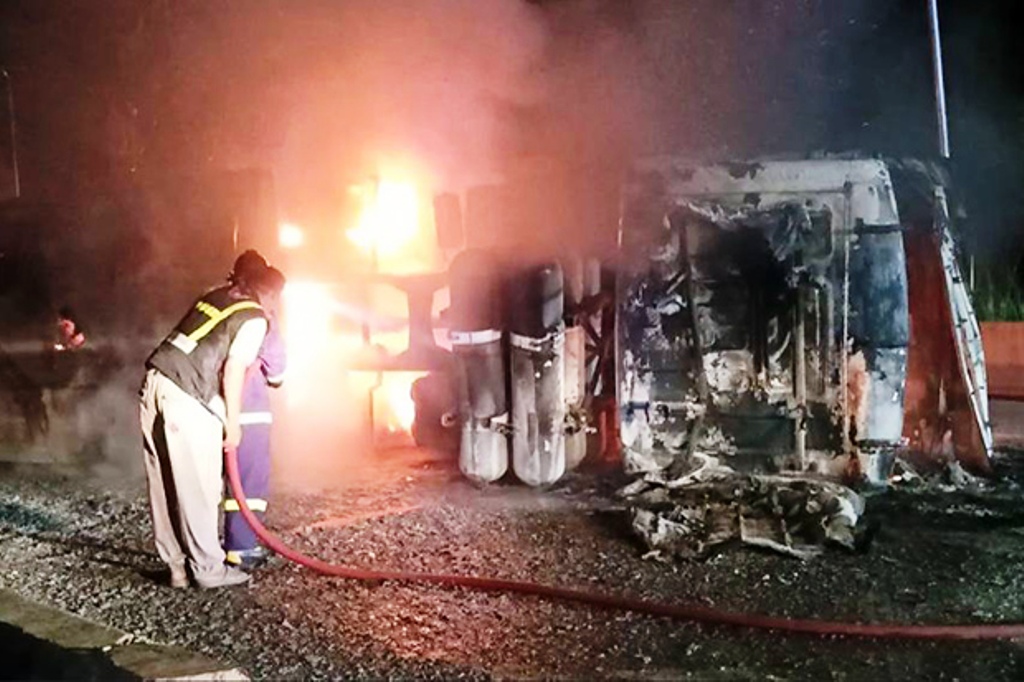 A two-month-old baby has been killed when a trailer truck overturned and went up in flames on a downhill road in central Thailand. The tragic accident happened in Nadi district of Prachin Buri province in the early hours on Wednesday.

The trailer truck driver and his wife, the baby’s parents, were seriously injured.

The accident occurred about 12.30am while the trailer truck was on a winding downhill section on Highway 304 in a mountainous area through Thap Lan and Khao Yai national parks in tambon Bu Phram, Nadi district.

Police, rescuers and a fire fighters were rushed to the scene and helped the driver and his wife out of the burning vehicle. Both were seriously injured. Their baby, about two months old, was found dead in the truck’s cabin.

Fire fighters were able to extinguish the fire within about  10 minutes.

Police were investigating the cause of the accident. Brake failure was suspected.There are signs along that road warning truck drivers to engage low gear.

State Railway of Thailand governor Nirut Maneephan also confirmed the death toll at the site of the crash to reporters. Footage shared by a government department showed the bus edging from the road onto train tracks before a blue cargo train slammed into its side.

A man was killed and his wife, son and granddaughter injured when a trailer truck ran their Toyota SUV off the Highway in southern Thailand on Sunday. The accident took place at tambon Tham Phannara in Nakhon Si Thammarat.

A police investigation revealed that the family’s Toyota Fortuner was heading for Chumphon province when it was overtaken and then knocked off the highway by a 22-wheel freight truck.

The SUV overturned and came to rest on its roof in the ditch in the median of the highway.

Rescuers used hydraulic jacks to force open the Toyota Fortuner SUV. One man, identified as Phap Sripen, 67, was found killed in the vehicle. Three other people were injured — his wife Uean, 58, his son Kiatipong, 36, and his 10-year-old granddaughter.

Kasem Chaichan, 22, the trailer truck driver, fled the scene after the accident. He surrendered at the Tham Phannara police station shortly afterwards. He also admitted to falling asleep at the wheel after several trips delivering gravel.