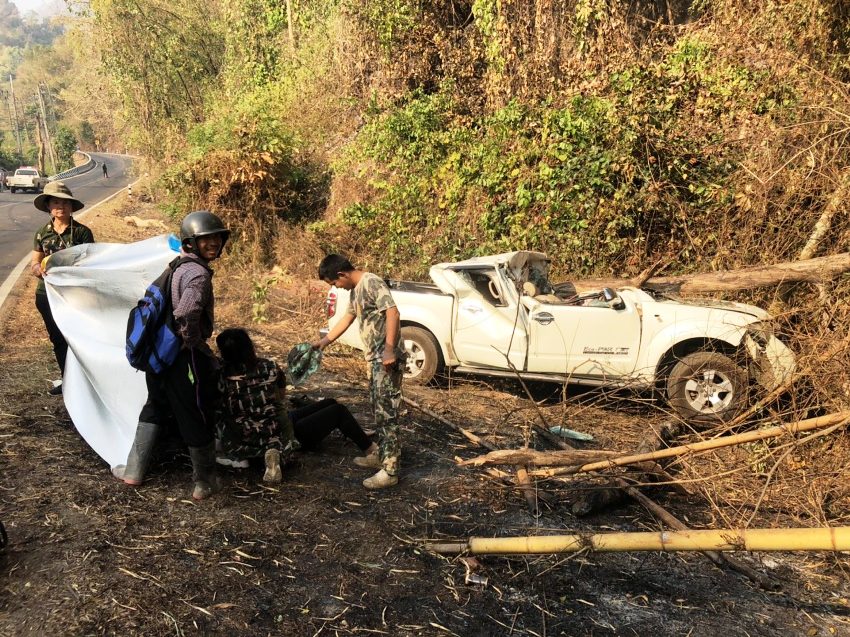 A 12 year-old boy has been killed and his pregnant sister injured when a falling tree broke and fell onto their pick-up in western Thailand. The tragic accident happened in Sangkhla Buri district of Kanchanaburi Saturday.

Pol Lt Col Piyachai Mankhong, said the incident occurred at about 3.30pm while the woman was driving her little brother to school. At kilometer marker 234, a tree suddenly broke down and fell on the pick-up, causing the vehicle to skid off the highway.

The pick-up was badly damaged as nearly the whole of its roof was swept off by the falling tree. Ms Kanokkorn, who is 5-month pregnant, was seriously injured while her her younger brother, Tao, was killed.

Police said the lower part of the tree that fell was burned in a fire that raged the roadside forest.

The fallen tree also brought down power poles and transmission cables, causing a blackout in the entire district.

Last week, a 17-year-old boy has been accidentally shot and killed by a friend with a homemade hand gun in Kanchanaburi. His teenage friend was showing off with the home-made gun to a group of friends early on Wednesday morning.