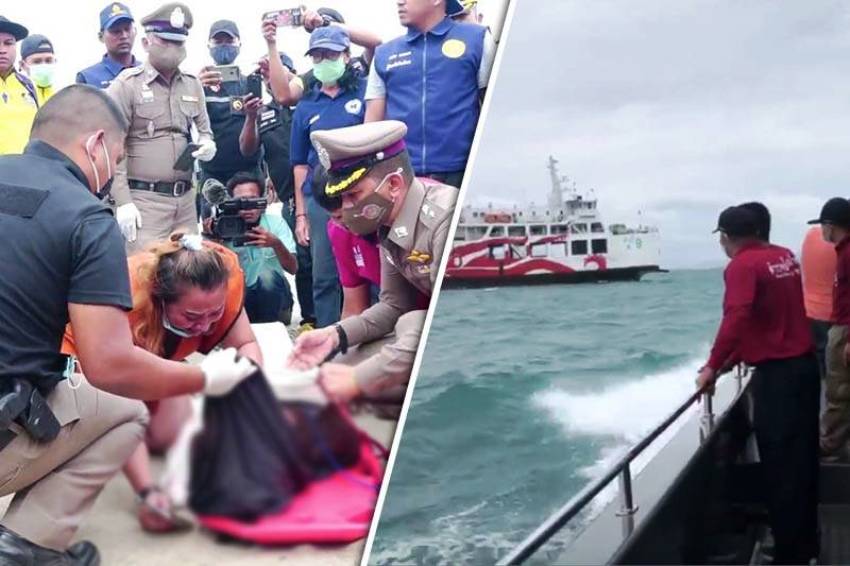 Marine rescue have rescued two of the seven people who went missing after a ferry capsized off Koh Samui island on Saturday night, leaving four still missing. Marine rescue workers also reported that one body was the ferry captain.

The Raja 4 ferry was loaded with three garbage trucks and a pick-up truck, heading for Don Sak pier on the mainland. About two nautical miles from Koh Samui the ferry was hit by a strong storm. High waves capsized the ferry at about 10pm.

Twelve of the 16 passengers on board were employees of Raja Ferry, 11 crew members and also a saleswoman. The four others were drivers of the three garbage trucks and also a pick-up truck.

A marine rescue operation centre was set up on Koh Samui Two marine rescue boats were dispatched on the rescue mission. They were able to rescue nine people on Saturday night, leaving seven others still missing.

The operation continued into the night, with three helicopters from the 2nd Naval Area, the 4th Army and the 7th Air Wing searching from the sky.

At about 12pm on Sunday, two of the missing were found on Koh Taen island, about 2 nautical miles from where the ferry capsized. They had managed to swim to the island, where local residents gave them food and water.

The two were identified as crewmembers Pachara Thiprat and Suvit Nakhonsethvorachai. A boat was dispatched to Koh Taen to take them to Koh Samui.

At 1.30pm, the rescue team found the body of a man on Koh Mod Daeng island, near Koh Taen. He was identified as Tewin Surat, the ferry skipper.

Mr Pachara, a survivor, said he drifted at sea for two or three hours., keeping afloat by a rubber buoy. At one point, he saw a marine police boat some distance from him, but was unable to attract their attention. He was eventually blown by the wind toward Koh Taen island, where he scrambled ashore at about 8am and was helped by locals.

On Sunday, Piya Nunil, chief of the Ang Thong Islands National Marine Park, declared the closure of the marine park from Aug 2-5 for safety reasons. The move followed the Thai Meteorological Department’s warning about tropical storm “Sinlaku”. The storm made a landfall over Vietnam on Sunday morning. Heavy rain is expected in all regions.