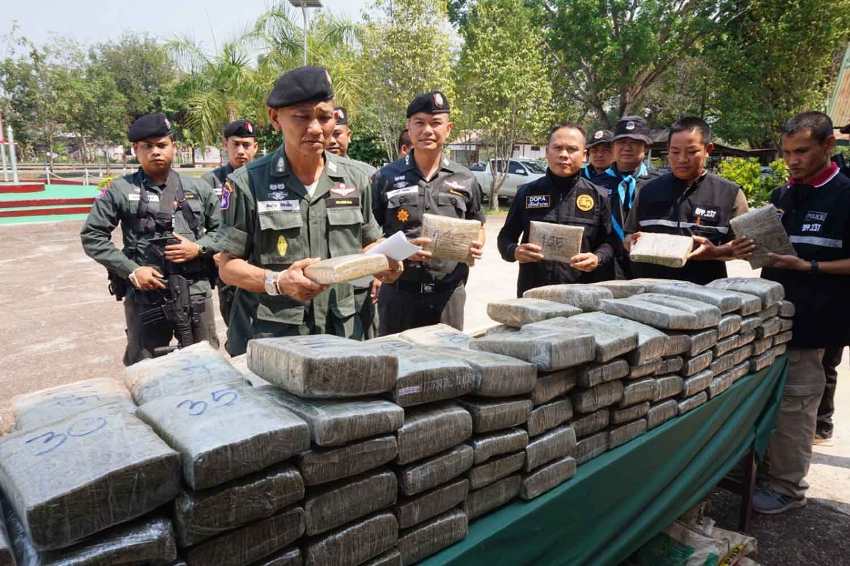 Border patrol police seized 183 kilograms of compressed marijuana in eight fertiliser sacks left on the bank of the Mekong river in northeastern Thailand on Sunday night.

Pol Lt Col Sompop Onsin, said the sacks were found on the bank of the Mekong river in tambon Chai Buri in Nakhon Phanom province. The sacks contained 183 bricks of dried marijuana, each weighing about 1 kg.

The sacks were believed to have been smuggled across the Mekong river and left for collection by drug couriers.

He also said the smuggling and distribution network was being investigated.

Pol Lt Col Sompop said that during the past month more than 3 tons of compressed marijuana has been seized on the river bank. Much of it in Tha Uthen district, according to the Bangkok Post.

Furthermore the shallow water and the many sand banks on the Mekong at this time of year make it easier for smugglers to deliver the drugs across the river, he added.

Pol Lt Col Sompop also said that the seized cannabis could possible used as medical marijuana. However that would be determined at a later date.

Last year Thailand was the first Asian country to amend its laws to allow for medical marijuana. The amendment is narrow, essentially allowing only research and development activities under license. With public institutions and consumption with a medical certificate.

Companies are positioning for the eventual commercialization and expecting similar liberalization throughout Asia. In the “green rush” to develop markets, companies must not ignore the answer to that core business question.