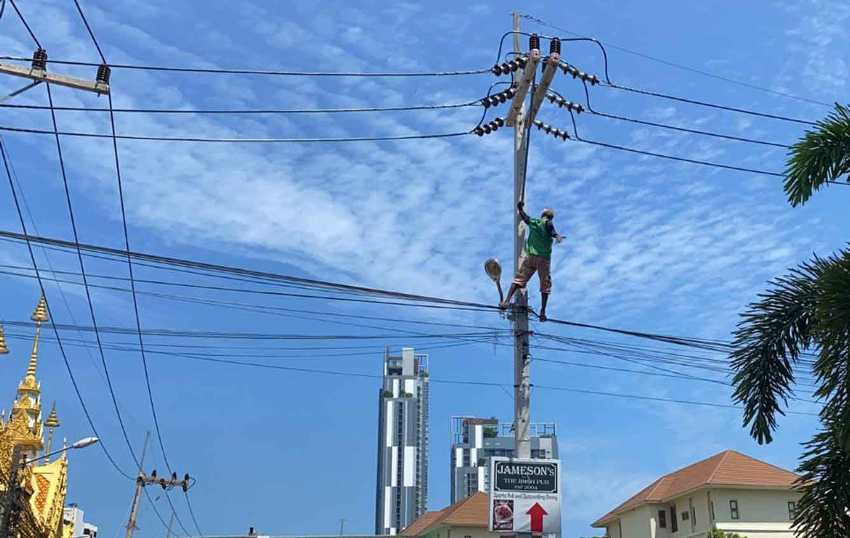 Police in Bang Lamung district of Pattaya arrived at the scene at about 11am accompanied with officials from the disaster prevention and mitigation office.

There they found, Mr. Paiboon Wisetsri, 59, was standing on cables attached to the power pole. He was about 10 metres above the ground.

Mr. Paiboon was yelling and complaining that he had registered for the government‘s 5,000 baht payout – in March and he still hadn’t received any money.

According to The Bangkok Post Mr. Paiboon was very emotional and possibly drunk.

After talking to him for about 30 minutes, officials coaxed the man back down from the power pole. The police contacted his relatives, and they were there to take him home.

Up to 14 million people in the informal job sector are now eligible for the government’s 5,000-baht payout.

The number went up from 12 million recipients a week ago. Although many complained of delays and application errors, Finance Ministry spokesman Lawan Saengsanit said. He also said most people would receive the funds by this Sunday.

About 1.6 million people will be paid their first of the three-month assistance on Tuesday alone.

He added that at least 6.1 million applicants have been asked to furnish additional information. However 400,000 people still have not submitted the details.