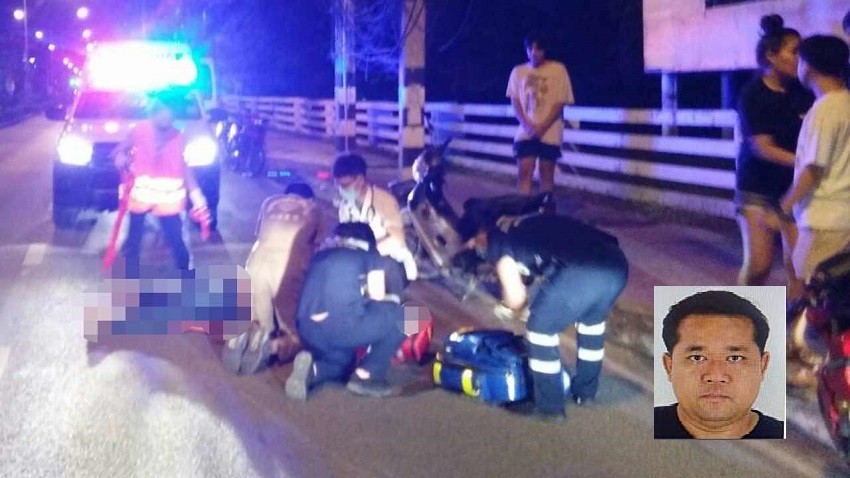 A key witness whose testimony convinced prosecutors to drop all charges against Red Bull heir Vorayuth “Boss” Yoovidhya has been killed. He died following a motorcycle crash in Chiang Mai province in the early hours of Thursday.

Jaruchart Maadthong, 40, a key witness in the Red Bull heir case was involved in a motorcycle crash at 1am. He died shortly after at Maharaj Nakorn Chiang Mai Hospital.

His body was sent for an autopsy and would be brought to Chiang Rai for funeral rites, according to Thai media. His family said they knew nothing about his involvement in the high-profile case.

The Chiang Rai native was one of two “new key witnesses” added to the case two years ago. The other was a retired officer, Air Marshal Jakkrit Thanomkulabutr.

Both testified that the Ferrari was allegedly travelling at 50-60 km/hour when the crash occurred.

Both were due to meet the House panel on justice and laws next month. Sira Janejaka, chairman of the panel, urged the police chief to give protection to the air marshal as he was the only remaining witness key to a trial.

Deputy attorney-general Nate Naksook, on behalf of the attorney-general, signed the order not to charge Mr. Vorayuth in late June. When the story broke in the Thai news media citizens where appalled over the decision.

After police wrapped up the case and sent it to prosecutors in 2018, Mr Vorayuth’s lawyer appealed to a justice committee of the National Legislative Assembly; the lawmaking body appointed by the junta after the 2014 military coup. The lawyer sought justice in the case and told the panel he had more witnesses and evidence.

Police later claimed they conducted an additional investigation as ordered by prosecutors.

They insisted they probed only the points ordered by the prosecutors. “We had no authority to expand the investigation. Or give more opinions at this stage,” a senior police officer told Thai media.

He insisted the two key witnesses had not been in the case prepared by the Thong Lor police station.

Mr. Vorayuth was accused of driving his black Ferrari when it hit the rear of a policeman’s motorcycle at high speed. Dragging his body along Sukhumvit Road before speeding away in the early morning of Sept 3, 2012. The victim was Pol Sgt Maj Wichian Klanprasert, 47, who was based at the Thong Lor station.

A source familiar with the Red bull heir case said Mr Vorayuth’s lawyer had met a lawyer representing relatives of the dead policeman and they agreed on compensation payments in an out-of-court settlement.

The relatives also decided not to file civil and criminal suits against Mr Vorayuth.

Meanwhile, the Bangkok Post reports that police officers have claimed that illicit chemical substances, including cocaine, were found in Red Bull heirs blood. Allegedly the drugs in his system were from his dental treatment, according to a House committee.

The committee had on Thursday invited officials for questioning regarding the hit-and-run case.

Natchanon Srikokuea, spokesman of the committee, told a press briefing on Thursday the panel had questioned officers who handled the case. Above all as to why they did not press charges related to illicit drug use against Mr Vorayuth. Because a positive blood test proving the use of narcotics.

The officers told the committee they did not press the charge because a dentist confirmed he had administered medicines which had cocaine as a component for dental treatment. When Mr Vorayuth drank alcohol, it mixed with the medicines which caused some chemical substances in the body to be released, Mr Natchanon quoted the police as saying.

However, the police did not provide clear details and had no medical documents to prove that chemical substances found in Mr Vorayuth’s body were the result of dental treatment, Mr Natchanon said, adding it was just a verbal explanation.

This issue is important and the Royal Thai Police is duty-bound to provide an explanation to clear suspicion, Mr Natchanon said.