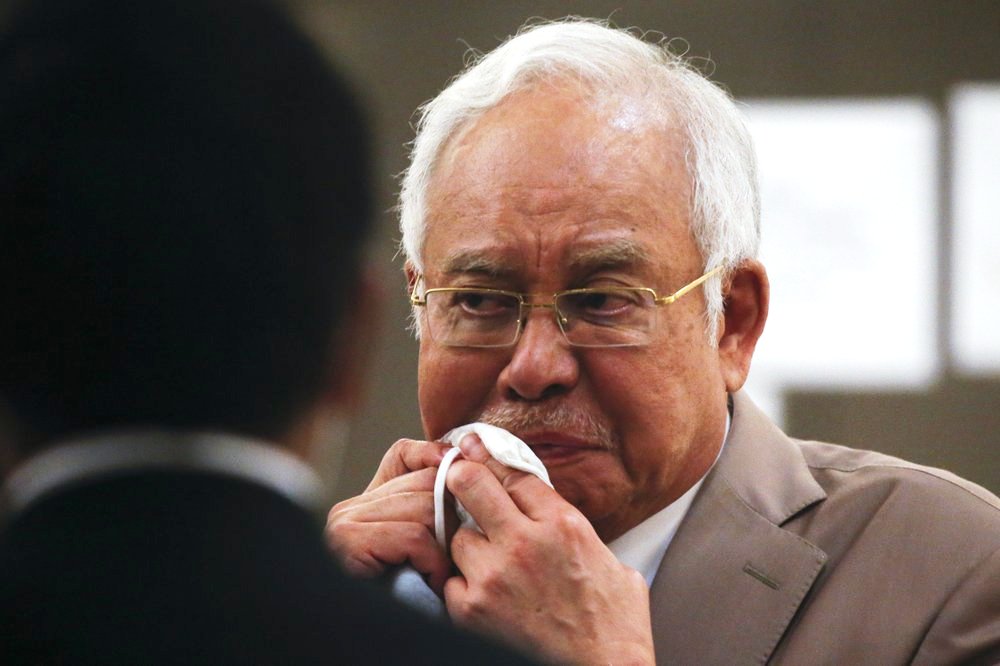 A Malaysian court sentenced former Prime Minister Najib Razak to serve 12 years in prison on Tuesday after finding him guilty of corruption.  He also faces more trials linked to the multibillion-dollar looting of the 1MDB state investment fund. A scandal that brought down his government two years ago.

Najib Razak, 67, was calm and stone-faced as he became the first Malaysian leader to be convicted, in what opposition lawmakers hailed as a victory for the people. Najib said he was disappointed with the ruling and vowed to fight to the end.

Judge Mohamad Nazlan Ghazali sentenced Najib to 12 years in jail on one count of abuse of power, 10 years each for three counts of criminal breach of trust, and 10 years each for three counts of money laundering, as well as a fine of 210 million ringgit ($49.4 million). But he ordered the sentences to run concurrently, meaning that Najib will face only up to 12 years in jail.

The judge allowed a stay of the jail sentence and fine pending Najib’s planned appeal. But he raised the bail amount and ordered Najib to report to the police twice a month.

“This is definitely not the end of the world, because there is a process of appeal,” Najib told a news conference after the sentencing. “As to my supporters, I hope they will continue to believe in me and believe in our struggle.”

Najib Razak’s father and uncle were Malaysia’s second and third prime ministers. Shortly after he took office in 2009, he set up 1MDB to ostensibly accelerate Malaysia’s economic development.

But the fund accumulated billions in debt, and U.S. investigators allege that at least $4.5 billion was stolen from it and laundered by Najib’s associates to finance Hollywood films and buy hotels, a luxury yacht, artwork, jewelry and other extravagances. More than $700 million from the fund allegedly landed in Najib’s bank accounts.

The judge read out an elaborate two-hour ruling on Tuesday that found Najib guilty of all seven charges.

He said the sentence was ”appropriate and proportionate” taking into account that Najib had committed the crime from a “position of trust” as prime minister, his final plea and the need to deter others from committing the same crime.

The ruling in the first of his five corruption trials came five months after Najib’s Malay party returned to government as the biggest bloc in an alliance that took power from the reformist government that ousted Najib’s in 2018 elections.

Analysts said the ruling would bolster the prosecution’s case in Najib Razak’s other trials and signal to the business community that Malaysia’s legal system has the strength to tackle international financial crimes. But others cautioned the ruling could be overturned as his political party remains in office.

Prosecutors earlier said the case had tarnished the country as a kleptocracy and sought a sentence that would remind those in high public office that “no one is above the law.”

Najib asked the court to take into account his achievements during his nine-year tenure and gave an oath in brief remarks in the dock before sentencing that he wasn’t aware of the 42 million ringgit ($9.8 million) channeled into his bank accounts from SRC International, a former unit of 1MDB.

Some of Najib’s supporters outside the courthouse cried when they learned of the verdict while others chanted “free bossku” and “long live bossku.” The nickname meaning “my boss” was coined for Najib in his social media campaign to reinvent himself as a working-class leader.

Najib, who faces a total of 42 charges in five separate trials, has said he was misled by rogue bankers and the case against him is political.

“The conviction would serve as a solid foundation for the prosecution in ensuing 1MDB-related trials,” said Oh Ei Sun, a senior fellow with Singapore’s Institute of International Affairs.

Oh said the ruling also would strengthen the credibility of current Prime Minister Muhyiddin Yassin, even though he now relies on Najib’s party for support. Muhyiddin was fired as Najib’s deputy exactly five years ago for speaking out on the 1MDB scandal.

Najib’s party is the biggest bloc in the current Malay nationalist alliance that has governed since March with a shaky, wafer-thin majority in parliament.

The ruling was “absolutely” good for Malaysia, said analyst Bridget Welsh, honorary research associate with the University of Nottingham Malaysia.

Muhyiddin said his government respected the ruling and Najib’s right to appeal. “Let us give space for the legal process to take place to ensure that justice is served,” he said in a statement.

During the trial, Najib was accused of using his position to receive a bribe for approving a government guarantee for billions in loans to SRC, committing criminal breach of trust and accepting proceeds from unlawful activities.

Evidence showed a complex trail of ill-gotten money paid for his home renovation, credit card purchases including a Chanel watch bought in Hawaii as a birthday gift for his wife, and disbursements to political parties.

The judge agreed with prosecutors on Tuesday that Najib had “overarching control” of SRC and failed to rebut allegations that he misappropriated money for his own use.

The judge said the defense’s argument that Najib, as prime minister, was duped by rogue bankers led by Malaysian fugitive financier Low Taek Jho was “too far-fetched” as the two had a close relationship. Investigators have identified Low as the mastermind behind the looting of 1MDB and he remains at large.

Plundering of the 1MDB fund

Najib Razak testified he assumed the money was part of a donation by the Saudi royal family arranged by Low as a guise to keep Najib from being suspicious of his plundering of the 1MDB fund. The judge debunked that argument in the guilty verdict, finding it an “elaborate but weak fabrication.”

Najib’s second and third trials involving some of the remaining charges are ongoing. His wife and several officials from his party and previous government have also been charged with graft related to 1MDB corruption.

“People should not really be celebrating now … we know in Malaysia, many of these politically charged cases, once they get to the appeals court, they get reversed,” said James Chin, professor of Asian studies at Australia’s University of Tasmania.

“So the fact that we have today’s guilty verdict doesn’t mean things will change. Najib will still remain an MP (member of parliament) and we have to wait for the appeal court system,” Chin added.

Prosecutors said they expect the appeals process to be completed within a year.