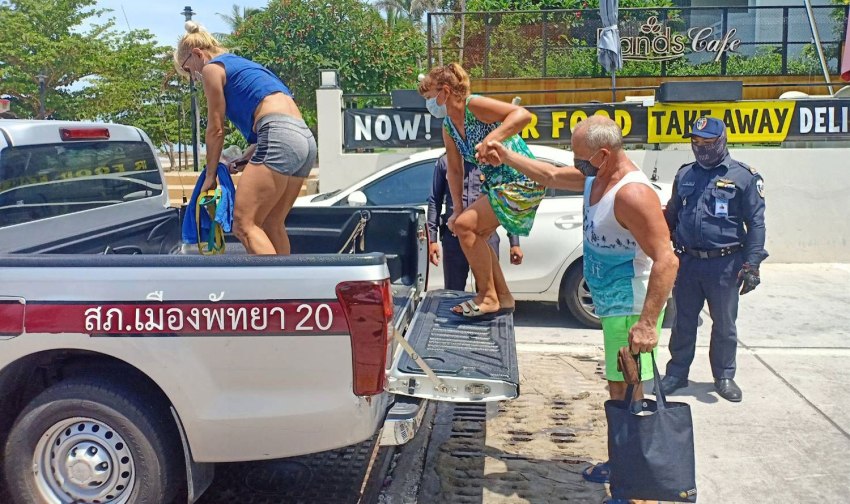 According to Athiwat Yungklang, of Pattaya City municipality, the three tourist were spotted behind the Asia Hotel by local officials. It was the first day that the beach closure took effect.

Athiwat said his team told the two women and a man to come ashore as swimming in the sea was prohibited. They ignored the warning so he felt compelled to alerted police. Under the state of emergency decree swimming on beaches is banned to contain the spread of the coronavirus.

The three were taken to the Pattaya City police station for legal action. Violators of the emergency decree can face a jail term of up to one year and/or a fine of 100,000 baht.

Pattaya City has ordered the closure of beaches at eight locations from Saturday until May 31. The beach closure is part of its effort to curb the spread of Covid-19. Above all because Pattaya officials don’t want to be blamed.

According to the Pattaya Municipality people may exercise on pavements along the beach, but cannot to go on the beaches. Furthermore people are banned from swimming, eating, and all other activities on the beach. Meanwhile, Tourist aren’t the only ones who want Pattaya to reopen its beaches. The homeless do too.

“Somkid”, a homeless man who refused to live in a shelter during the coronavirus pandemic, continues to wander Pattaya Beach. Sleeping in an abandoned building near the shoreline.

He said he prefers to sleep on the beach, as it’s cooler than inland. Before Pattaya closed all the beaches, he used to sleep under the stars and palm trees and liked it fine.

Somkid admitted that he was afraid of contracting Covid-19 and was given face masks by some generous people. Some people also give him food as well.

While food is still a scarcity, Somkid said he’s feeling better now that the coronavirus crisis has eased in Pattaya. With no new cases reported for weeks. Hopefully, he said, Pattaya will reopen the beaches and life will get back what’s normal.

Thailand Records Four New Cases of Coronavirus and One Death