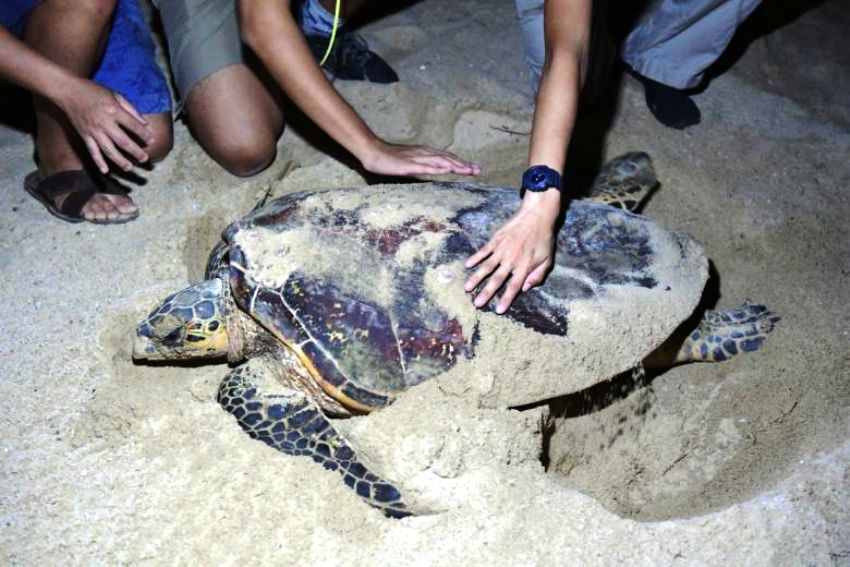 A critically endangered sea turtle has laid at least 80 eggs on a Koh Samui Thai beach just minutes before the start of World Environment Day. A sign of how wildlife is making the most of the covid-19 pandemic limiting human movement.

The Hawksbill sea turtle chose a beach on Koh Samui island typically that’s usually visited by million people each year. The sea turtle was tracked by veterinarians thanks to an implanted digital chip.

National park and wildlife conservation staff were also on the spot check the health of the turtle. Veterinarians estimated to be about 30 years old. Conservationists on Koh Samui said turtles have laid eggs on more than a dozen occasions over the past four months.

The Hawksbill turtles numbers have reduced significantly because of the trade in its shells, which is now illegal.
The price for one hawksbill turtle in the Southeast Asia can be as low as US$70. However a finished taxidermy product can sell for more than US$1000 in China, Reuters reports.

Hawksbill turtles are endangered because of their beautiful shell. They were hunted for hundreds of years in huge numbers. Their shell is used in many types of jewelry and trinkets especially in China. Harvesting hawksbill turtles for their shell nearly drove the population to extinction.

Thankfully 2020 has been a bumper year for turtles in Thailand. The Kingdom has seen recorded numbers of rare leatherback sea turtles return to lay eggs. The largest number in two decades as the turtles found beaches empty of tourists.
Thailand was visited by nearly 40 million people in 2019. Consequently that number slumped to about 14 million this year due to the impact of covid-19 on global travel.

A 25-year-old green sea turtle named “Bank” has recovered from a life-saving operation to remove 915 coins from her stomach. Bank the green sea turtle flapped her flippers with vigor in her first swim after the operation.

Head of Chulalongkorn University’s veterinary medical aquatic animal research center Dr. Nantarika Chansue said the 25-year-old turtle was rescued from a pool in the seaside town of Sri Racha by the Thai navy.

The cause of her ill health was revealed by 3D scans. The 3d scans showed she had been eating the coins thrown into her pool by people believed doing so would bring them good luck.