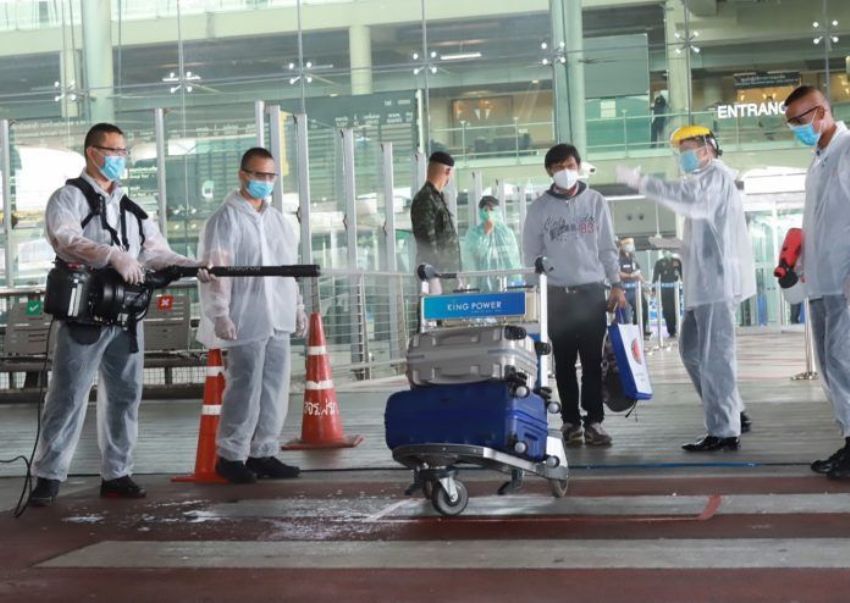 Panprapa Yongtrakul, of the Centre for Covid-19 Situation Administration, said the four new cases had arrived earlier from Egypt. Two were men aged 21 who were quarantined in Chon Buri province.

Their infection was confirmed by their second test, 11 days after their arrival,but they showed no symptoms . Fifteen others on the same flight earlier tested positive for Covid-19.

Two other cases were male students aged 20 and 24. They arrived last Friday and were quarantined in Chon Buri. They were positive for Covid-19 in their first test on Tuesday, five days after arrival, while being asymptomatic. Four other people on their flight had previously been confirmed infected, Dr Panprapa said.

Two other cases arrived from Sudan – male and female students aged 20. They arrived on July 10 with some symptoms. Their first test at Suvarnabhumi airport showed negative results.

Their third tests proved positive, 12 days after arrival. Fifteen other people on the same flight to Thailand have been confirmed with the disease.

Two other cases are workers who returned to Thailand from the United States last Saturday. They were quarantined in Bangkok and their infection were confirmed by their first test on Tuesday, the Bangkok Post reports.

Furthermore the total number of cases is now 3,269, of whom 3,105 have recovered and been discharged. Meanwhile, 106 patients remained at hospitals, and all of them were quarantined returnees. The death toll was frozen at 58, Dr Panprapa said.

She said that 151 Thai soldiers returned from a military exercise in Hawaii on Wednesday evening, of whom 140 were not ill and were taken to quarantine in Chon Buri. Ten others had fevers with excessive phlegm and coughing. They were tested at Phramongkutklao Hospital in Bangkok. They are presently waiting for results.

The other soldier had a chronic disease unrelated to Covid-19.

There have now been more than 15 million cases of coronavirus globally, with the United States, Brazil and India combining to make up almost 50 per cent of the infections.

The number of novel coronavirus infections around the world passed 15 million Wednesday, with Latin America and the Caribbean, one of the hardest-hit regions, notching more than four million cases.

Over 142,000 lives have been lost to the virus in the United States over the last five months, the highest in the world.

Among the 20 countries with the largest outbreaks, the United States ranks sixth highest globally for deaths per capita, according to a Reuters analysis.