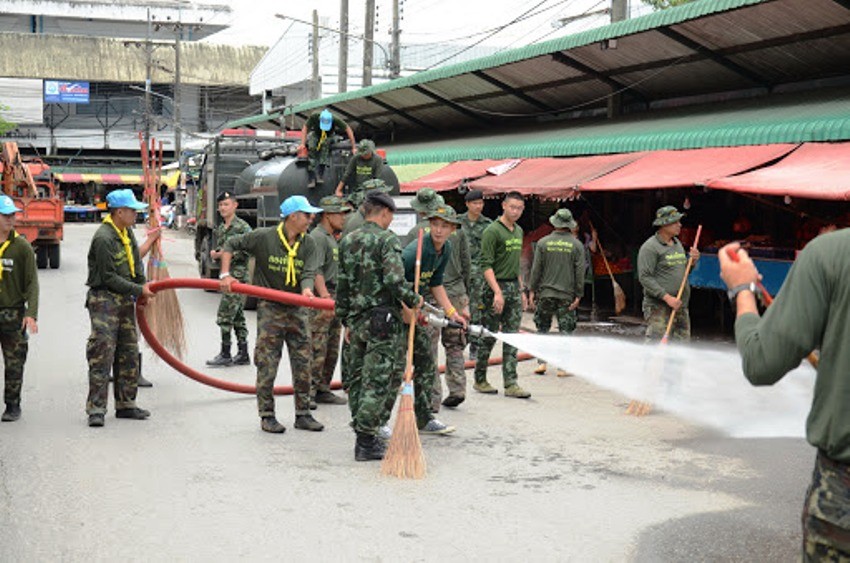 The Royal Thai army has begin spraying roads with disinfectant in Bangkok nightly to combat the spread of the Covid-19 virus. Thai Army units have been deployed to carry out the nightly cleaning from 1am to 5am.

The cleaning operation uses water mixed with disinfectant and will last until the end of the month.

The spraying was approved at a high-level meeting of army units chaired by army chief Apirat Kongsompong. The spraying will be carried out by the Army Chemical Department also the Army Air Defence Artillery Unit

Trucks will spray the disinfectant-water solution on roads which pass through crowded areas of the capital. The disinfectant spraying operating is in the early hours to avoid traffic congestion.

The army will be assisted by the Bangkok Metropolitan Administration, according to the Bangkok Post.

The government has also imposed a two-week shutdown of entertainment nightspots and other venues to combat the outbreak.

Army spokeswoman Col Sirichan Ngathong said it was an also opportune time to clean and disinfect the streets and roads.

Meanwhile, a Thai soldier has been killed and two others wounded in a fire fight between an army patrol and insurgents in Southern Thailand. The clash occurred about noon near Pattani dam in Yala on Wednesday.

On Tuesday, three insurgents were killed in an exchange of fire with a government force near Pattani dam. That operation began on March 12 after one soldier was killed in a clash.