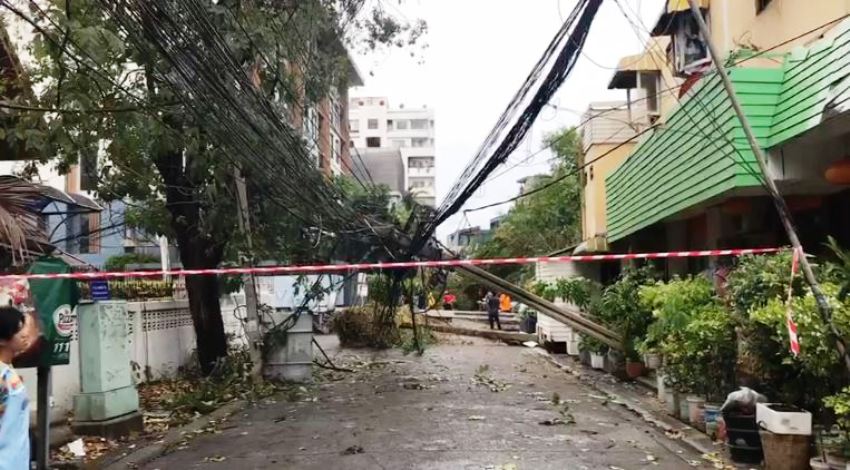 In Umphang and Mae Sot districts of Tak province, hail storms wreaked havoc in wide areas for more than half an hour. The storm in Umphang caused a blackout and damage to utility poles and houses.

In the central province of Ang Thong, at least 50 houses in five districts were damaged by summer thunderstorm that started Saturday night, Disaster Prevention and Mitigation Office reported.

Meanwhile, The Department of Disaster Prevention and Mitigation, has coordinated with every northern province in preparing staff. Above all to deal with thunderstorms and wind gusts expected.

The Thai public will need to check their house’s durability because the strong winds and rain may cause severe damage. he Thai Meteorological Department has predicted that northern Thailand will be hit with more thunderstorms this month. Also some areas may need to deal with hail and lightning.

From 18th – 21st March, thunderstorms will ease an temperatures will also rise. Residents of the area can expect hot weather during the day leading to heatwaves in some areas.

The Department of Disaster Prevention and Mitigation under the supervision of the Ministry of the Interior, has ordered provinces and district security centers in high-risk areas to monitor the weather round the clock.

Reinforcement of staff will be ready at all times for rescue missions. The department has also asked members of the public to follow the weather forecasts and strictly observe any warnings.

Those badly affected by the storms, should call Hotline 1784, available around the clock.