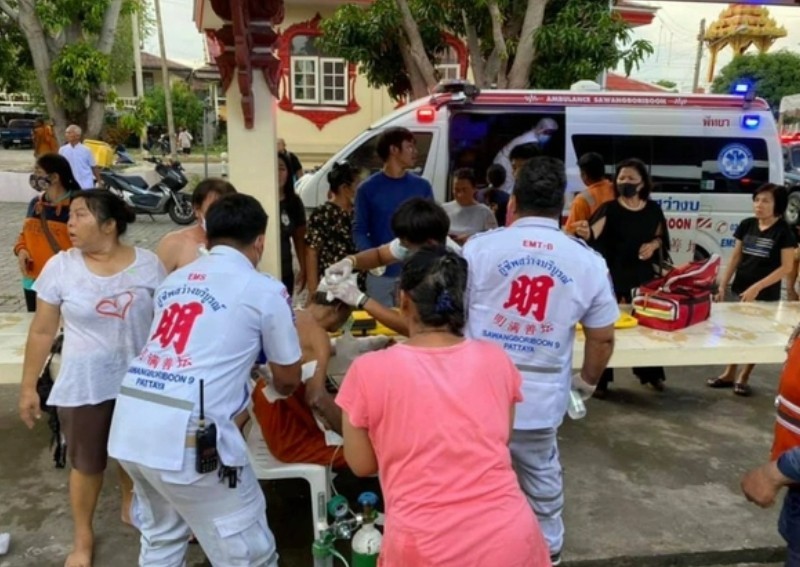 Two undertakers were hospitalized with severe burns following an explosion at a crematorium in central Thailand’s  Chonburi province. The explosion occurred at the crematorium at Wat Banglamung in Chonburi’s Banglamung district.

Sawang Boriboon Rescue Foundation reported one victims, Mr. Changpradit, 74, suffered severe burns all over the body and is in a critical condition. While the other victim, Mr. Wanchai, 63, suffered burns on his hands and torso.

Both undertakers were rushed to a nearby hospital Asia One reports.

Witnesses told officials that they were attending a funeral but the crematorium seemed to stop working. The two victims, who are both undertakers, tried to inspect the burning chamber. Suddenly it exploded, causing injuries to the victims and prompting funeral attendees to flee the scene.

The explosion left cracks in the crematorium while burning wood and cement went flying in the area. There is no report of casualties among funeral attendees.

The temple has been sealed off and officials from Police Technical Affairs Division will inspect the crematorium on Friday to determine the cause of the explosion. There was no mention on what happened to the body being cremated.

Meanwhile, a feud between two brothers in northeastern Thailand has ended in murder. A younger brother became incensed his older brother was having an affair with his wife and shot him.

Me. Somkid Phrachai was arrested for fatally shooting his brother Mr. Sathit Phrachai in the chest. The suspect said he lived in their father’s house with his wife and son.

Two weeks earlier, his older brother had come to live with them. Soon after he noticed footprints that were not his in front of the bedroom where he slept with his wife, said police

When he asked his wife to explain, she only gave a suspicious smirk, which heightened Somkid’s paranoia about a possible affair. His father then said he may have left the footprints after entering the room earlier to check on his grandson.

However, Somkid still had doubts, which led to an argument between the trio which resulted in him murdering his brother.

The grief-stricken father attended the funeral rite on Thursday. Meanwhile, Somkid’s wife, Janrat Bua-khao, 23, insisted she had not had an affair with Sathit.