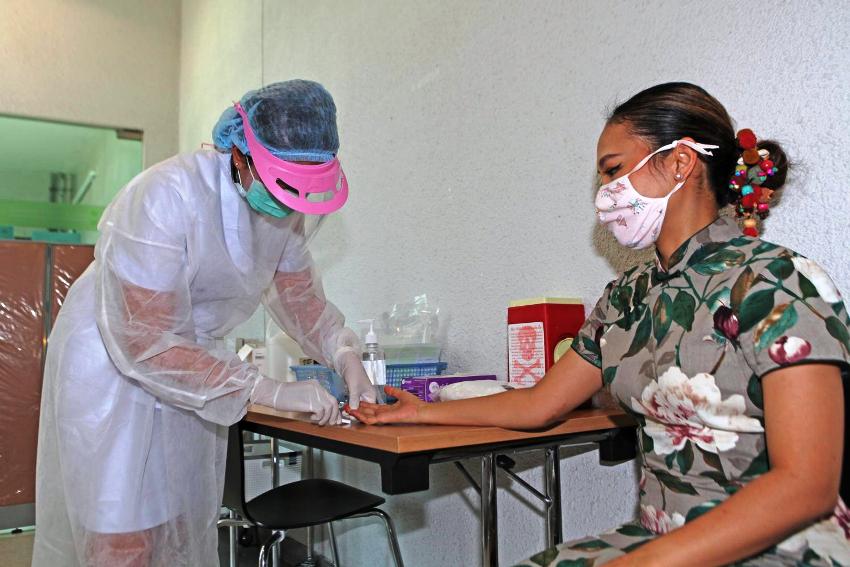 The number of new infections among Thailand’s health department personnel has risen sharply amid calls for better protection. Above all for doctors, nurses and other staff on the front-line of the battle against Covid-19.

The Health Department Centre for Covid-19 on Sunday declared 143 new infections. Bringing the total of Covid-19 cases in Thailand to 1,388. The number of new infected health department personnel was eight.

Doctors, nurses and other staff are tending to a rapidly increasing number of patients. Above all while essential items, including face masks, are in short supply as the virus spreads. One doctor spent his free time with other staff at a hospital sewing face masks.

Hospitals need not only donations of supplies but also moral support, the Health Department said. The lives, and those of family members, are at risk, it added.

The Thailand Nursing and Midwifery Council has praised nurses and other health personnel working on the front-lines. It has also called on them to take great care while on duty.

One of the most serious outbreaks among health personnel so far occurred at Bannang Sata Hospital in Bannang Sata district of Yala. Consequently one doctor and two nurses were infected with Covid-19.

The infections were detected between March 22-25th, 2020. The infections forced the hospital to temporarily scale back operations by receiving only serious cases. Patients were sent to other hospitals nearby, according to the Public Health Department. All 21 staff at the hospital are being quarantined over the Wuhan virus, it added without disclosing the location.

The hospital has been declared a dangerous communicable disease zone. All patients not exposed to the virus have been transferred to other hospitals, the less serious cases to Than To, Raman and Krong Pinang hospitals in the three neighbouring districts and patients in poorer health to Yala Hospital in Muang district.

Provincial public health chief Songkran Maichum said on Thursday the hospital in Bannang Sata could be fully reopened on Wednesday after it was sanitised.

Artists have sung praises for all health personnel. Unlike Public Health Minister Anutin Charnvirakul who criticized them before apologizing for his remark.

The United Nations on Friday called for better protection for health care workers and called for contributions from the public and private sectors to ensure sufficient protective equipment for them.

“The brave doctors, nurses, emergency first responders and other medical professionals working on the frontlines of the global fight against the coronavirus pandemic are heroes. Their tireless work and self-sacrifice show the best of humanity,” said Baskut Tuncak, UN Special Rapporteur on hazardous substances. “They must also be protected,” he added.