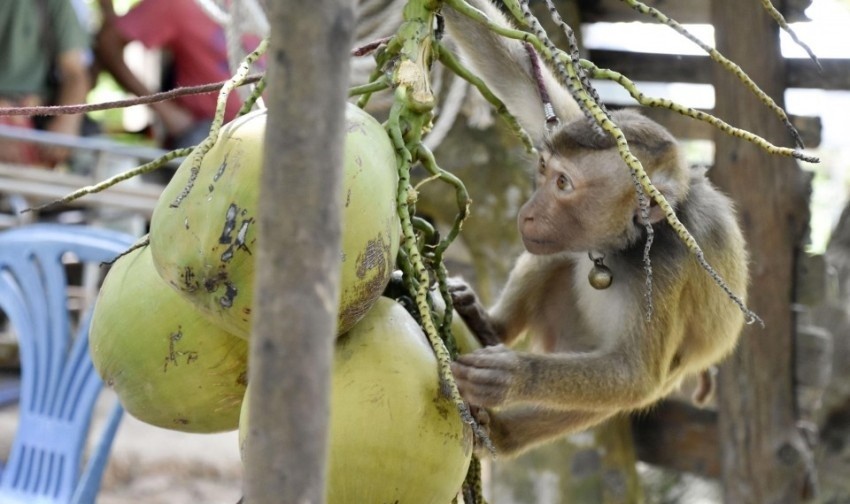 A top coconut milk producer in Thailand has reported a sharp drop in sales after an animal rights group PETA accused the industry of using monkey labour. Theppadungporn Coconut Co said, its now auditing plantations to assure monkeys are not being used.

Several British retailers pulled Thai coconut products from their shelves earlier this month after a report by People for Ethical Treatment of Animals. Consequently PETA has alleged that coconuts in Thailand are mainly picked by abused monkeys.

Carrie Symonds, British Prime Minister Boris Johnson’s fiancée has welcomed pledges from Thailand to stop selling coconut products that use monkey labour. She has also urged others to follow suit over monkey labour.

Peta has also rejected the Thai government’s claim that use of monkeys was almost “non-existent”. Its report said the majority of Thai coconuts were harvested by monkeys caught from the wild.

Coconuts are overwhelmingly collected by humans not monkeys

Mr Aphisak said evidence and documents were being prepared for customers in its main markets, and also for Peta. Above all to show monkeys were not involved in Theppadungporn Coconut products.

It started auditing plantations in January and of the more than 100 checked by a third party so far. Furthermore none were found to have used monkeys, Mr Aphisak told the Bangkok Post.

Coconuts are overwhelmingly collected by humans using poles, Mr Aphisak and the Thai authorities have said.

Wirat Saengjun, owner of a plantation in Samut Songkram close to Bangkok, said he was now selling about half the number of coconuts at half of the price of earlier in the year, forcing him to reduce his workforce.

“Coconut milk is not selling very well. It’s probably from the news,” he said, referring to the PETA report.

Actions by PETA called into question

PETA is an animal rights organization — one of the largest and most influential in the world. They have a history of using impactful and very visible campaigns carried out on behalf of animals.

Yet PETA casts a very dark shadow, riddled with stories about needless euthanization, manipulation, and even Eco-terrorism. Even among other animal activists, PETA’s ways are disliked.

Some believe PETA has had a long history of weaponizing and exploiting the oppression of marginalized minorities to forward their animal advocacy. Even perpetrating this oppression countless times.

Let’s see why there is so much controversy surrounding them. We have added links on accusations towards PETA.

The Dark Side of PETA

Five reasons not to support PETA