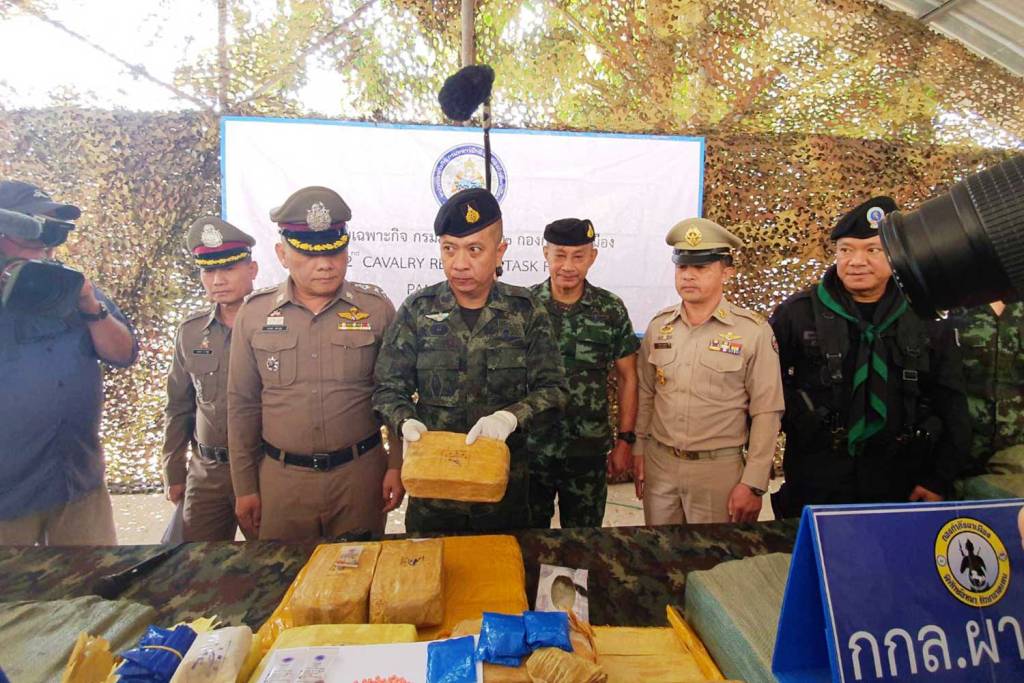 Three young men have been arrested in an operation carried out by soldiers from the Pha Muang task force in Bandu, Chiang Rai. Authorities seized 13 sacks containing 1.7 million speed pills.

Col Chatree Sa-nguantham of the Pha Muang task force told Thai media that soldiers were deployed to the Nong Bua reservoir in Bandu at around 10.30pm on Friday following a tip-off.  The informant told authorities drugs were going to be smuggled from Mae Sai district to an area near the reservoir.

Soldiers spotted a white Toyota SUC parked near the reservoir, with three men standing near it. The soldiers asked to conduct a search and found 13 sacks inside.

The sacks contained 1.7 million speed pills and the three men were arrested, Col Chatree said. The packages containing the Meth pills bore an eagle logo. A logo that law enforcement officials haven’t before.

Col Chatree said the meth pills are possibly from a new drug production gang that may be emerging along the country’s northern border.

Meanwhile, Chiang Rai police also report that 400,000 meth pills and 2 kilograms of crystal meth were seized in Mae Chan, Chiang Rai. Police were tipped-off that off that a pickup truck would be transporting drugs from Mae Fah Luang district to a village in Mae Chan.

Police spotted the pickup and proceeded to give chase. The driver sped up with the chase ending in an area of ​​Mae Chan-Thammachik Road in Village No. 4 of Mae Chan District. The driver jumped out of the vehicle and started firing shots at police in an attempt to escape. Consequently officers returned fire and killed the driver.

Two drug busts in Mae Chan in a month

Furthermore when police inspected the pickup they found sacks containing meth pills and crystal meth. The drivers body was also dispatched to a local hospital, while the truck was towed to the Mae Chan police station.

Last month, Army Rangers in Chiang Rai also seize about 5 million meth pills from a pickup truck crashed and abandoned by smugglers in Mae Chan. The pickup truck was consequently found to be loaded with 25 sacks of meth pills.

They found the truck in Lao Fu village after it crashed into a house, the occupants fled.

According to the Bangkok Post, the Wa State in the Golden Triangle has long been known as a key meth producing area. Even more it is the hub of an ever-expanding meth production and export enterprise. Above all an enterprise that is now finding more markets beyond Southeast Asia.

Even more an over supply of drugs has also worsened Thailand’s methamphetamine epidemic. Meth pills now costs as little as 40 baht to buy. Down from 200-300 baht a just few years ago.